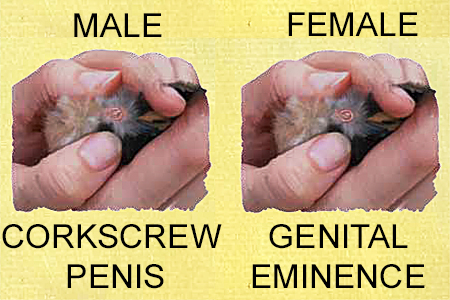 Male and female waterfowl of the same breed and variety are difficult to tell apart until they are several weeks old. Except for a few autosex breeds of geese, the only way to determine the gender of waterfowl hatchlings is by vent sexing. Happily that is not nearly as difficult as it is for chickens and other land fowl.

As ducklings grow, darker bills may distinguish the females of nonwhite varieties. Mallard hens and others of similar color have brown and orange bills, compared to the males’ greenish bills. As the ducklings feather out, the head and back feathers of Mallard-colored hens are not as dark as those of the drakes (male ducks).

Distinguishing a male from a female gosling is tricky, except for the autosex breeds — Pilgrims and Shetlands, and to a limited extent Embdens, Romans, and Sebastopols. Among Pilgrim and Shetland geese, the males and females maintain two different plumage colors throughout their lives. The ganders are yellow when young and feather out white, while the hens are gray or gray and white.

Embdens, Romans, and Sebastopols may be sexed with a fair degree of accuracy for only about their first three days of life, when the hens are a darker gray than the ganders. As they grow, both genders are basically all white.

Among African and Chinese geese of about six weeks of age, or sometimes earlier, the head knob of the male becomes noticeably larger than that of the female. Into maturity, the head knob remains the distinguishing feature by which the genders may be told apart.

For goose breeds that are neither autosex nor knobbed, male and female goslings can be difficult to tell apart. With experience, you might learn to recognize subtle differences in their voices and body posture.

Vent sexing is the only reliable way to sex non-autosex waterfowl hatchlings. However, it requires lots of practice, as well as extreme care to avoid injuring delicate parts.

Having an experienced person show you how to do it is the best way to learn. Barring that, practice on ducklings or goslings that are a couple of weeks old. That way you can learn with less chance of injuring the older birds and a better chance of seeing what you’re looking for.

The purpose of vent sexing is to detect the presence or absence of a penis in the cloaca just inside a bird’s vent. Because the organ is so tiny, you need a strong light and good eyesight, or a good desktop magnifying glass with a built-in light.

Understandably, the little fellas can be reluctant to show you theirs. So just because a penis doesn’t pop out does not automatically mean the bird is a female. You need to peer into the everted cloaca to ascertain whether or not a penis is actually in there. Here are the steps for vent sexing a duckling or gosling:

The same technique is used to vent sex mature waterfowl. But because of their larger size, they can be a bit more difficult to handle. And when they squirt, it won’t be a “little bit” of poop!