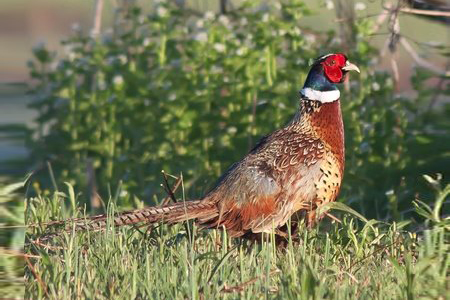 Ringneck pheasants are traditionally raised to be released as game birds. But people have plenty of other reasons for raising ringneck pheasants. They are also raised for their excellent meat, tasty eggs, gorgeous feathers, or simply for their awesome beauty.

The ringneck pheasant is a native game bird in China. Since the late 1800s, attempts have been made to establish populations throughout the United States. Good vegetative cover has led to success in some areas. In other cases, episodes of extreme cold weather and heavy snow have led to failure.

The most important condition for successfully releasing ringnecks is to ensure proper habitat. They prefer grasslands or fields of row crops that provide plenty to eat, safe places to nest, multiple ways to evade predators, and protection from harsh weather.

Pheasant is a popular dish in upscale restaurants, as well as in many homes. Hens grow to about 3 pounds, cocks up to 4 pounds live weight.

The meat is pinkish white and tastes much like chicken or turkey but is finer and leaner. It also contains an impressive array of nutrients. As in other poultry, pheasant breast meat is lighter and more tender than the darker, firmer leg and thigh meat.

Numerous recipes may be found online, including this family favorite pheasant recipe. Many cooks marinate the meat in milk for a day or two, then prepare it any way they would cook chicken.

Pheasant hens are seasonal layers, producing 80 to 90 small brown-green eggs starting sometime in March. Each pheasant egg weighs about 1 ounce, compared to 2 ounces for a large chicken egg. Although you need to two pheasant eggs for each chicken egg called for in a recipe, they taste about the same as chicken eggs.

If you plan to collect the eggs for hatching, the ideal mating ration is 1 cock per 8 hens. Whether under a hen or in an incubator, the eggs hatch in 23 to 24 days, compared to 21 days for most chicken breeds.

As ornamental fowl, ringneck pheasants are quite elegant. The cocks have bold, multicolor plumage, a blue-green head with red eye patches, and a white ring around the neck. The hens are not as colorful. Their feathers are a dusty brown with darker brown markings.

Pheasants must be penned to keep them from flying away and to protect them from predators. The pheasant pen should have at least 20 square feet of space per bird, and an overhead cover. It also needs vegetation that provides a natural setting.

Brooding pheasant chicks is much the same as brooding chickens. Like some chicken breeds, pheasant chicks tend to be flighty, so you need to move carefully to avoid frightening them.

Pheasant chicks require a starter game bird ration with 27% to 28% protein. Where game bird ration isn’t available, turkey starter is a good substitute. Using a drown-proof water base or placing marbles in the waterer base minimizes the potential for drowning.

When the chicks are two weeks old, they will start flying out of the brooder, if it isn’t covered. At that age, when the weather is sunny and warm, they may be let into a covered flight pen during the day and returned to the warm brooder at night. The flight pen should provide at least two square feet per chick and have vegetative cover for hiding and for shade.

Perhaps the biggest health issue with pheasant chicks is cannibalism. A large flight pen with lots of vegetation keeps them from pecking each other, as does furnishing alfalfa hay for the chicks to peck at.

Some states also require any game birds from outside the state be accompanied by a health certificate, which in most cases is an NPIP (National Poultry Improvement Plan) 9-3 form furnished by the hatchery. Wyoming is the only state that requires an additional, and expensive, Certificate of Veterinary Inspection. Because of this added expense, Cackle Hatchery does not ship pheasant chicks to Wyoming.

Once pheasants grow past the brooding stage, they typically remain healthy. With careful management they can live for 20 years or more.

Gail Damerow is the author of Hatching and Brooding Your Own Chicks.