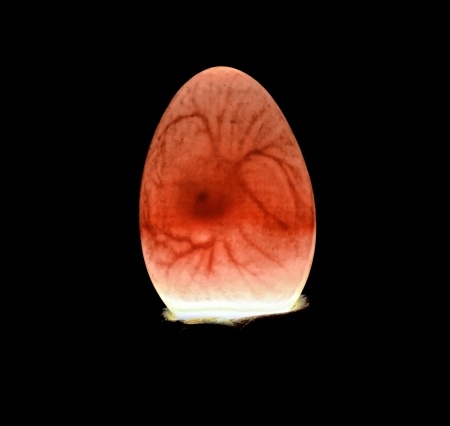 A team of researchers from the Dresden University of Technology and the University of Leipzig has developed an innovative new way to sex chicks before they hatch. The technique is 95 percent effective, and could potentially eliminate the need for commercial poultry operations to cull millions of day-old male chicks each year.

So how does the laser spectroscopy technique work?

First, a laser cuts a small hole at the top of an egg. Next, near-infrared spectroscopy is used to scan the embryo and analyze its DNA content, which is about 2 percent higher in the embryos of male chicks. If the spectrometer determines the embryo is that of a female chick, the hole is patched and the egg is returned to the incubator. Otherwise, the egg is destroyed. The technique is reliable after just three days of incubation – before the embryos have begun to develop nerve cells.

Currently, the spectroscopy sexing technique takes about 15 to 20 seconds to complete, but the scientists who developed it think they can reduce that figure to less than 10 seconds. They expect their product will be available to commercial poultry operations by early next year.

It will probably be a while before spectroscopy completely replaces traditional methods of sexing, but in Europe the new technique has been met with a great deal of enthusiasm from lawmakers and animal rights groups. Thus far, the researchers haven’t provided an estimate as to what the machine will cost. Even if the initial expense is high, however, it would require no long-term labor costs to maintain.

2 thoughts on “Scientists Use Laser Spectroscopy to Sex Chicken Embryos”