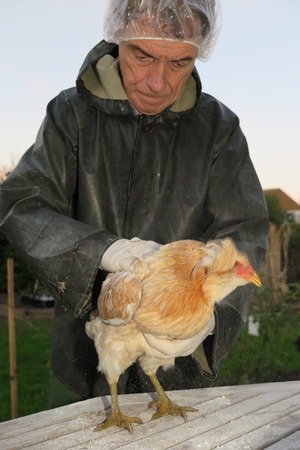 Protecting your flock from mites and lice can seem like an impossible problem. In fact, many poultry producers in years past didn’t even bother trying to get rid of mites, lice and similar pest infestations because it was such a common and invasive problem. Fortunately, there are now some easy things you can do to protect your flock from these parasites.

Where Do They Come From?

Parasites like lice and mites are often brought to chickens by wild birds outside of the farm. Taking steps to prevent wild birds from nesting in your chicken coop can help to reduce the introduction of parasites. Preventing the problem is always easier than managing it afterward.

How do you know if your flock is experiencing a parasite problem? Some of the telltale signs include seeing lice, mites or other parasites on chickens or around the chicken coop, of course. Since lice and mites live in moist environments, you should turn birds upside down and pull feathers away to inspect the vent area. If they have lice you’ll see them on the skin here. You may also see symptoms of anemia in your birds, like pale wattles or combs, chickens picking or scratching more than usual, humans being bitten by parasites, decreased egg production, broken or damaged feathers, and red patches on a chicken’s skin.

Chicken lice can be identified by easily. These tiny insects feature long, narrow bodies, and feed on shedding skin cells while laying their eggs on the feathers. Issues with chicken lice can be treated easily with carbaryl dust, natural pyrethrum or permethrin. Be sure to pull all feathers that have egg clusters attached to them and burn them. Then, do a treatment 30 days later to break the cycle.

Chicken mites are also tiny insects, but feature rounded, dark bodies which are very hard to see. Some types of mites stay on the chicken all the time, while other types feed on the chicken at night and hide during the day. Permethrin is commonly used to treat chicken mites.

Free-range chickens will often find a sandy spot to wallow on their own, but consider providing confined chickens with a sandy area where they can take a dirt bath as well. Wallowing allows chickens to dislodge and smother parasites naturally. It also helps chickens to clean their bodies, which helps to further reduce the likelihood that parasites will be attracted to them. A mixture of sand, ash, dirt and some garden bug dusting powder makes for a good dirt bath to keep parasites away.

Parasites like mites and lice can cause problems for chickens. In young birds, these parasites can even cause death in some cases. Among mature birds, parasites may cause skin irritation, weight problems, reduced laying, feather damage and even anemia, leading to less effective and productive chickens.

3 thoughts on “Protecting Your Flock From Mites and Lice”