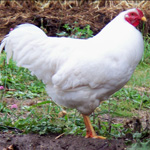 The heritage Chantecler chicken is a dual-purpose breed suitable for the backyard production of both meat and eggs. It is the only breed of chicken originating in Canada, developed to withstand the rigors of bitter cold winters.

The Chantecler hen has a gentle temperament, lays brown-shell eggs, and tends toward broodiness as she ages.

The White Chantecler was the brain child of Brother Wilfred Chatelain, who noted that the poultry breeds in Canada at the time all had originated either in the United States or in Europe. In 1908 he and other monks of Cistercian Abbey in Quebec set out to develop a distinctly Canadian breed, which they introduced to the public in 1918. The name Chantecler derives from the French words “chanter,” meaning to sing, and “clair,” meaning clear, and comes from the play Chantecler, in which the lead character is a rooster named Chantecler who brags that his clear song brings the sun up each morning.

The Chantecler chicken breed was developed by judiciously crossing several different breeds to obtain a chicken with white plumage and tight feathering that lays through the winter and has a frost-resistant cushion comb and tiny wattles. The conformation of the Chantecler is strikingly similar to that of the red-feathered Buckeye, developed in the United States with much the same goal – the main difference (aside from color) being that the Buckeye has a pea comb.

A partridge variety of Chantecler was later developed to be more predator resistant on pasture.

The white Chantecler was admitted to the American Standard of Perfection in 1921. The partridge variety was added in 1925. Eventually bantam versions of both varieties were developed and admitted to the Standard in 1960.

Today The Livestock Conservancy lists the Chantecler chicken breed as being critically endangered. Chicken breeds on the critical list have an estimated global population of less than 1,000, with fewer than 500 breeding individuals in the United States and five or fewer primary breeding flocks. Cackle Hatchery is proud to be among those who are working to conserve the rare White Chantecler chicken.

Gail Damerow is author of The Chicken Encyclopedia