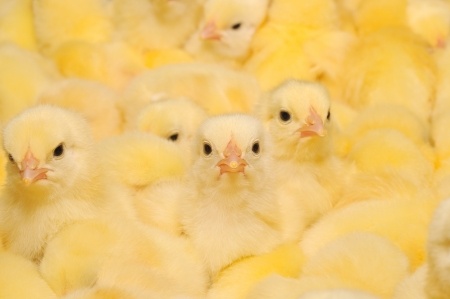 Large chicken farms see thousands of chicks hatch every day. Once they’re hatched, the farms have to determine their sex as quickly as possible before they can be sorted and sent to their respective destinations. Unfortunately, judging the sex of baby chickens is no easy task.

Chicken sexers must rely on their intuitions and experience to identify minute differences in the vents of chicks that indicate their sex.

Chicken sexers typically sort between 800 and 1,200 chickens in an hour, many of which are only a day old. They’re expected to sort the chicks with an astounding 90-95% percent accuracy in order to ensure customer satisfaction. So how do they do it? That’s a good question.

In ancient Japan, students of chicken sexing would sort chicks into bins under the observation of a master. The master would evaluate their decisions throughout the process, providing them with a terse “yes” or “no” to indicate their accuracy. This process would continue for weeks or months until the student’s intuitions were honed to rival those of the master.

Over the years, chicken sexers have supplemented their craft with logic, but their remarkable skill is still largely grounded in instinct and intuition. Many chicken sexers aren’t sure quite how they accurately sort males from females – they just do. In recent decades, a new technique known as feather sexing has emerged as a somewhat more straightforward alternative to traditional vent sexing. In feather sexing operations, chicks are selectively bred to produce feathers that appear different on males and females. Sometimes, for instance, hatcheries will selectively breed females from a parent stock to have long-feathered wings. Bear in mind that this is not an exact science, so you may still see a male with long-feathered wings from time to time.

2 thoughts on “The Mysterious Minds of Chicken Sexers”