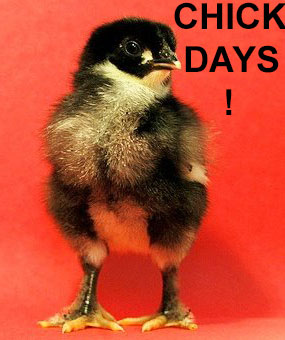 Chick Days occur during a brief period in spring when local feed, farm and home stores offer baby chicks — and sometimes ducklings, turkey poults and guinea keets — for sale. Nearly all stores have chicks around Easter time. With the ever-increasing popularity of chicken keeping, some stores start Chick Days in early February and may continue through June or even later. Where Chick Days occur in June or July, kids will be home from school to enjoy the experience of raising chicks.

An advantage to purchasing chicks during Chick Days is that you can see how healthy and alert they are. A disadvantage is that usually only a few breeds are offered during Chick Day. Some stores, however, invite customers to preorder chicks of other breeds, which allows you reserve the minimum number (usually between 3 and 6) of your chosen breed without incurring the associated shipping costs.

While some stores label their chicks as to breed, others do not. And you can’t always count on the clerks to know which breeds are being offered.

Some stores offer chicks as “straight run,” “as hatched” or “unsexed,” meaning some will grow up to be pullets (young hens) while others will be cockerels (young roosters). To avoid unwanted roosters in areas where they are not allowed, many stores offer only sexed pullets. Since chick sexing is not an exact science, the occasional chick may turn out to be a rooster anyway.

During Chick Days, stores also stock feeders and waterers of a proper size for chicks, as well as a balanced chick starter ration, suitable brooder bedding and brooder heating units. Some may even offer a complete chick brooding setup. Many stores also supply a variety of poultry keeping books.

Some stores schedule special events during Chick Days, such as workshops on how to feed and care for baby chicks, or book signings where you can meet authors of some of the many chicken books available for sale.

Cackle Hatchery supplies chicks to some 1,600 feed, farm and home stores across the country. Check with your local stores to find out when their next spring Chick Days will be scheduled.

“Or you can order direct from Cackle Hatchery and your chicks will be delivered directly to you by the United States Postal Service,” says owner Jeff Smith. “At Cackle Hatchery it’s always Chick Days, February through September.” 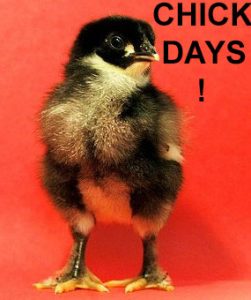