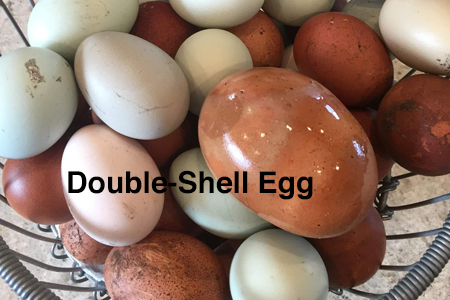 If one of your hens lays a super big egg, it likely contains another egg inside. Such an egg is called a double egg or a double-shell egg and is the result of a reverse peristalsis contraction.

How an Egg Is Laid

To understand how this happens, you need to know how an egg normally develops inside a chicken. A hen’s single functioning ovary, located at the top of the oviduct, contains undeveloped yolks. The yolks mature one by one, at approximately 25-hour intervals.

As each yolk matures, the ovary releases it into the oviduct, where it begins its 25-hour journey toward becoming an egg. On the way through the oviduct, the yolk gets enveloped in egg white, then encased within a membrane, and finally surrounded by a hard shell.

The developing egg is pushed along the oviduct by peristalsis — the involuntary contraction and relaxation of the oviduct’s muscles. It’s the same wave-like action that moves food through the esophagus into the stomach, and from there through the intestines.

How a Double-Shell Egg Occurs

Sometimes a second mature yolk releases before the currently developing egg is laid. The contraction resulting from the release of this second yolk can cause the developing egg to reverse course.

The reversed egg joins up with the newly forming egg, and the two become encased together within a second shell. The outer shell contains a normal yolk and albumen plus a second fully formed egg, shell and all. In this YouTube video you can see what an egg inside of an egg looks like.

Double-shell eggs are so rare no one has determined precisely why they occur. Those super big eggs may not be fun for a hen to lay, but they are treasured by chicken keepers who are lucky enough to find one.