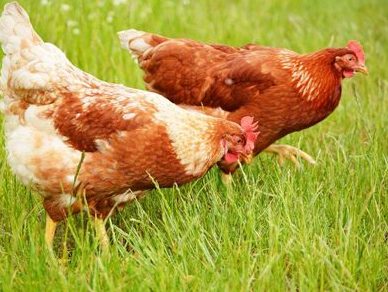 A strain, also called a bloodline or simply a line, is a family of related chickens. They are distinctive in having been selectively bred by a single person or organization long enough for all the chickens to be uniquely uniform in some way. Each strain of purebred chickens has all the traits that define its breed, but with additional unique traits that make the strain clearly distinguishable from other strains of the same breed and variety.

This distinctive stamp of uniqueness may involve such things as conformation, plumage color or pattern, rate of growth, mature size, egg color, laying ability, fertility, and hatchability. Often the difference between two strains within a variety is greater than the difference between two varieties within a breed. These differences occur because each breeder places emphasis on certain specific traits during many years of selective breeding, while keeping the flock closed to outcrosses from other bloodlines.

Developing a distinctive strain typically takes at least five years. Once established, the strain is usually identified by its developer’s name. For meat- or egg-production strains, the name is commonly that of a corporation. Non-commercial strains, such as those intended for such activities as exhibition, fly tying, or cockfighting, are named after their individual breeder.

The name of a well-known strain tells you quite a bit about the characteristics of the birds within that strain. Further, once you are familiar with a particular strain, you can readily recognize individual birds from that strain without being told the strain’s name.

If you acquire chickens of a named strain, your vision for breeding the flock may be different from that of the original developer. Continued selective breeding may preserve at least some of that uniqueness, but eventually will develop into your own vision of uniqueness. In fact, after the first generation in your own breeding program, the original strain name no longer applies.

Today, most popular layer strains are hybrids, created by crossing two different breeds. The breeds used in making such a cross are themselves proprietary strains, developed for the unique characteristics each contributes to the hybrid strain.

So you could, for instance, create red sex links by crossing a Rhode Island Red with a Rhode Island White, but the resulting chickens won’t have the identical same characteristics as red sex links purchased from a hatchery. That’s because individuals don’t have access to the same genetic material as commercial hatcheries do.

Even red sex links purchased from one source may not be identical to those from another source. But they can be pretty close. By working toward the same goal, equivalent strains can be developed from differing genetics.

For example, at the behest of France’s Ministry of Agriculture, the ISA<https://www.isa-poultry.com/en/about-us/history/> Brown was developed in the 1970s using largely Rhode Island Reds and Rhode Island Whites. The goal was to produce a superior layer of large eggs with brown shells. The now popular ISA Brown is a proprietary strain of red sex links.

Since 1993, Cackle Hatchery has produced a red sex link strain from the same cross but using different bloodlines. The Cinnamon Queen is bred from Cackle Hatchery’s proprietary Rhode Island Red male strain and Rhode Island White female strain. The Cinnamon Queen is so nearly identical to the ISA Brown in both appearance and laying performance that you might consider them to be essentially different brand names for the same type of laying hen.

And that’s today’s news from the Cackle Coops.