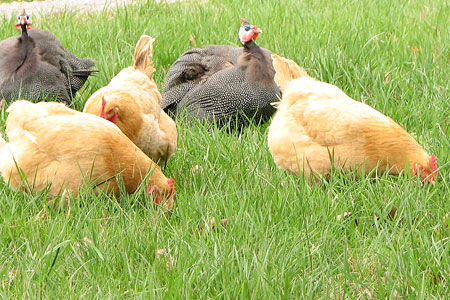 If you would wonder what the word poultry means, you might think first to look in the American Poultry Association’s Standard of Perfection. At the front of the book is a glossary covering 8-pages of terms from “A.O.C.” to “yearling,” but no “poultry.” So, what is poultry?

Even though the Standard doesn’t define poultry, the APA website says: “The term poultry includes large and small bantam chickens, ducks, geese, turkeys and guinea fowl.” On the other hand, Merriam-Webster defines “poultry” as “domestic birds kept for meat or eggs.”

The United States Department of Agriculture gets more specific: “Poultry is any domesticated bird used for food. Varieties include chicken, turkey, goose, duck, Rock Cornish hens, and game birds such as pheasant, squab and guinea fowl. Also included are huge birds such as ostrich, emu and rhea (ratites).”

The Code of Federal Regulations a note as to whether or not the birds are living: “Poultry means any domesticated bird (chickens, turkeys, ducks, geese, guineas, ratites, or squabs, also termed young pigeons from one to about thirty days of age), whether live or dead.”

The APA Standard, like the USDA and FDA, does not define the word “class,” but lists these 14 classes:

Under some of its specific breed descriptions, the Standard lists “Economic Qualities.” Typical qualities include “General purpose fowl for meat and egg production,” or “Good layers…” Many descriptions, particularly those for bantams, ducks, geese, and turkeys omit any mentions of economic qualities.

Yet the book’s “Historical Introduction” states that “The aim of the [American Poultry] Association has been to stabilize our economic and commercial breeds to uniform size, shape, and color, with good production and practicability; with provision that ornamental breeds, including the Bantam, be attractive, productive, and meet requirements of the Standard breeder.”

Despite including the words “production” and “productive,” the Standard clearly emphasizes exhibition and prize winning over productivity. As stated on the APA website, “Membership in the American Poultry Association is a way to keep abreast of what’s happening in the Exhibition poultry hobby.”

Bottom line: To the commercial industry and sustainable homesteaders, the economic qualities of food production are paramount in defining the word “poultry.” To exhibitors and other enthusiasts — many of whom wouldn’t dream of eating their backyard birds — the definition of “poultry” puts greater emphasis on attractive appearance. It’s safe to say, however, that the incredible eggs laid by hens of all species are an essential part of everyone’s poultry equation.

Oh, and for the record, the APA’s definition of A.O.C. is decidedly non-political and largely non-controversial. The term refers to poultry varieties identified by plumage color and is an abbreviation of “all other colors” or “any other color.”