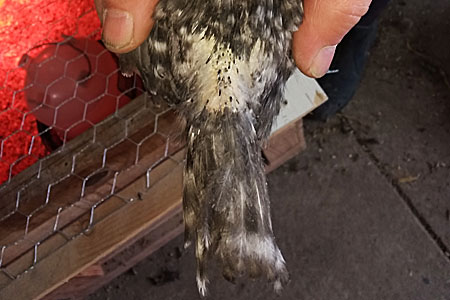 A chick’s baby feathers are delicate and vulnerable while the bird grows a complete set of adult plumage. Until then, unsightly feather loss in baby chicks may be caused by rubbing or picking.

When a chick reaches the age of three and four weeks, its body feathers grow and fill out. By the end of the fifth week most feathers are in, and the bird starts to look like a miniature chicken.

Just about then, though, the chick begins to molt — some feathers drop out sequentially, to be replaced by new feathers. Before the bird reaches maturity, it goes through yet another partial molt.

Partially grown feathers, particularly on the lower back, easily may be broken or rubbed off. One common cause is overcrowding in the brooder. When chicks are so crowded they end up climbing on each other, back feathers get rubbed off by sharp little claws. Back feathers may also rub off if chicks go through a too-low doorway, for instance when traveling back and forth from an inside brooder to an outside exercise yard.

Frightened chicks may climb over each other in an attempt to get away from whatever scared them. Baby birds become particularly nervous after being moved to unfamiliar housing. Whenever chicks are moved to new housing, keep the lights dim and check often to make sure they are okay.

Feather picking is a common cause of feather loss on the lower backs of chicks. Newly forming pinfeathers contain a supply of blood to nourish the growing feathers. While using its beak to groom, a chick may accidentally pull out one of these tender feathers. Further, those interesting-looking dark feathers sprouting among baby down attract the curiosity of other chicks, which check them out the only way they know how — by pecking.

When a pinfeather is pulled out, it spurts a small amount of tasty blood, which attracts more attention and more picking, especially around the tail and along the back. A snack of blood is particularly attractive at a time when feathering birds crave additional protein, enticing chicks to pick their own pinfeathers as well as each other’s.

Chicks grow fast and can quickly become overcrowded unless they are given gradually more living space. Besides causing chicks to climb on each other, overcrowding can lead to overheating — another trigger for picking.

Overheating also can occur if chicks don’t have space to move away from the source of heat to seek their own comfort zone. Regularly reducing the brooding temperature, while increasing ventilation, will help prevent picking as chicks grow.

Bright lights left on 24/7 don’t allow baby birds to get enough sleep, making them irritable and more likely to pick. After the first 48 hours, change the bright brooder lights to dimmer lights.  Better yet, use a non-light heat source at night.

Make sure all the chicks have ready access to feed and water. Switch to larger feeders and drinkers as the birds grow, so they never run out during the day and start picking each other instead of pecking for sustenance. To ensure they get enough protein for feather growth, feed an appropriately formulated ration for chicks.

Once the chicks start growing, do not introduce birds of a different age into the brooder. The stronger, older birds are likely to peck the weaker, younger ones.

Brooding on wooden slats or wire mesh can trigger picking because the birds don’t have much else to peck at. Brooding on loose bedding, or at least including an area suitable for dustbathing, offers opportunities for chicks to engage in normal avian activities.

To provide entertainment that curtails picking by relieving boredom, Cackle Hatchery® offers a swing and a practice roost. Pet stores display all sorts of bird toys, many of which are just as much fun for baby chicks as for cage birds to play with.