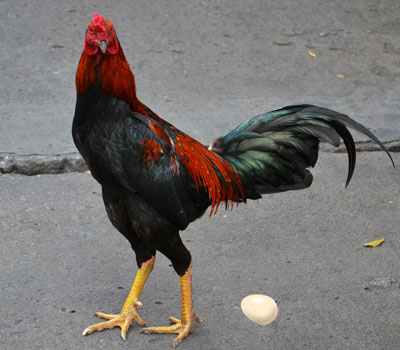 In the United States, in 1922 a brown Leghorn “rooster” in Madison, Wisconsin, began laying eggs. To verify, the Poultry Husbandry Department at the Wisconsin Experiment Station locked the bird in a cage designed so pranksters couldn’t slip in eggs on the sly. The “rooster” laid an egg a day.

So how can a rooster lay eggs?

Well, of course, you’ve probably guessed that in such cases, the “rooster” is actually a hen in disguise. What happens is that the hen undergoes spontaneous sex reversal.

A hen has two ovaries, but normally only the left one is functional. An ovarian cyst or a tumor in the left ovary, or elsewhere, may cause the ovary to atrophy. The latent ovary on the right side may then develop into a combination ovary-testicle. So, while the dysfunctional left ovary reduces estrogen output, the testicular component of the right ovary releases testosterone.

As a result, the hen’s comb grows larger. She may molt into male plumage. She may crow and mount other hens. She may even produce viable sperm to fertilize eggs that hatch into chicks.

Spontaneous sex change is more common in aging hens reaching the end of their productive lives. Experiments verify that if a hen’s left ovary is removed, she will similarly take on the characteristics of a rooster.

That’s what happened in the case of the Madison Leghorn hen-cum-rooster. At the next molt, “he” turned back into a hen. Although this scenario is less common than spontaneous sex reversal in aging hens, historically it has occurred often enough to lead various cultures to conflate cock’s eggs with witchcraft.

Whether a true rooster might undergo sex reversal to become a hen is much less well documented. That phenomenon supposedly occurred in 2010 in Italy. After a fox killed all the hens on a Tuscany farm, a rooster named Gianni laid eggs.

In China during the winter of 2012, a farmer and his family ate their hens one by one until only the rooster was left. Thereafter they were astounded to discover their “rooster” laying eggs. The unanswered question is whether such cases demonstrate a rooster becoming a hen, or rather involve a hen that all along had been masquerading as a rooster.

Gail Damerow is author of  The Chicken Health Handbook.