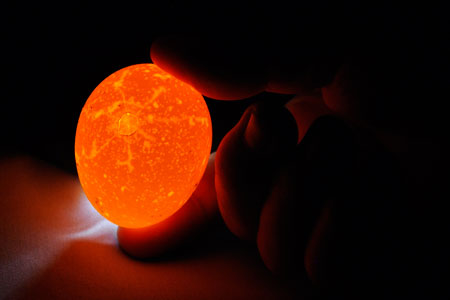 An egg’s internal qualities cannot be determined by looking at the outside of the egg. Detecting such things as blood spots, double yolks, hairline cracks, and thin shells requires candling the eggs. Candling means examining the contents of an egg by placing it against a bright light. It’s called candling because the bright light was once furnished by candles.

Eggs that are being saved for hatching are candled to ensure they have no defects that may prevent them from hatching. Another reason for candling is to avoid hatching eggs from hens that have heritable traits that cause egg defects.

During incubation, developing eggs are candled after one week to weed out those that are infertile, at two weeks to remove those that have stalled in development, and sometimes again at 19 days, as the eggs are being readied for hatching. By candling during incubation and removing non-developing eggs, you can avoid the unpleasant experience of a rotten-egg explosion.

Eggs that will be sold for culinary purposes are candled to remove any that may cause consumer consternation, such as blood spots,<https://www.healthline.com/nutrition/bloody-egg#causes> meat spots, and double yolks. Eggs with hairline cracks and other shell imperfections are also removed for reasons of health safety.

Candling is done with an electrical device powering a light bulb. An inexpensive handheld candler looks like a small flashlight with a plug-in cord. In fact, a small, bright, battery operated flashlight also works.

Use your candler in a dark room. Hold the egg at a slight angle, large end to the light. Making sure your fingers don’t block the light, turn the egg until either you see something or you’re certain there’s nothing to see.

A good way to gain practice candling is to start with white-shell eggs. But don’t buy white eggs from the grocery. You won’t find much of interest in them because they’ve already been candled.

A blood or meat spot appears as a small, dark dot on the egg yolk, or sometimes within the white. Such a spot is not harmful but is certainly not appetizing to find in a boiled or fried egg. Since blood spots can be hereditary, watch for them if you’re selling eggs or hatching replacement layers for table egg production.

Hairline cracks and other shell imperfections are easy to spot on any egg. Cracks appear as white veins in the shell. Since cracks open the way for bacteria to enter, eliminate these eggs from your selection for hatching or eating. Cracks are more likely to occur in eggs with thin shells.

During incubation, after one week, candling will likely reveal one of these three things:

Assuming you remove clear eggs and those with blood rings during the first candling, after two weeks of incubation you’ll likely find one of these two things: