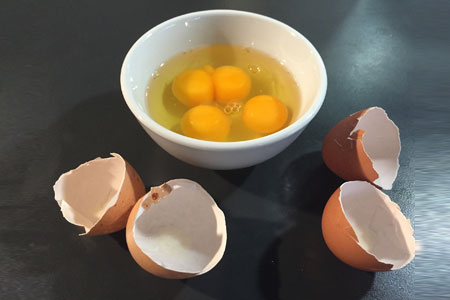 In the normal course of events, two yolks appear in approximately 0.1% of eggs laid, or about one in every 1,000. So why are we lately hearing so much about those rare double yolk eggs? And what causes double yolk eggs in the first place?

A double yolk egg occurs while the egg is developing inside the hen. The hen, or more likely pullet (female chicken less than one year old), ovulates too rapidly, releasing two (or more!) yolks within a short time. During their journey through the reproductive tract, the yolks become encased within a single shell.

Double yolkers are typically laid by a young pullet whose reproductive cycle is not yet well synchronized. Although less common, double yolkers also may be laid by an elderly hen nearing the end of her productive life. In either case, it’s a temporary glitch in the system.

Double yolkers are usually easy to recognize, since they’re quite a bit larger than eggs that are typical for the hen (or the flock). The presence of two yolks may be verified by candling. The reason double yolkers don’t commonly appear in supermarket cartons is that they have been removed from the lot through candling.

Although double yolkers command higher prices than single yolk eggs, they do not contain twice the nutritional value, according to the folks at Saunder’s. The reason is that each of the two yolks is smaller than a regular size yolk: “Ultimately, a double yolk egg’s nutrition facts are comparable to a jumbo egg.”

Double yolkers sometimes find their way into cartons of eggs sold at farmer’s markets. And, of course, you may occasionally find one in your own chicken or duck coop.

Double yolkers rarely hatch successfully because the shell is not roomy enough to accommodate two embryos. Assuming both do begin to develop, with insufficient space for proper growth, one or both will likely be deformed.

They may perhaps be connected to one another. Or one will be considerably smaller than the other. And both, or at least the smaller one, may run out of growth space or oxygen and die in the shell. Should both make it to hatching time, the cramped quarters hamper the gymnastics required for them to break into the airspace and eventually escape from the shell.

Despite all these obstacles, on rare occasions a pair of twins manages to hatch from a double yolk egg. But typically, one or both will be physically challenged and unlikely to survive.

Double yolkers are the result of what’s considered to be a genetic defect resulting from a recessive gene and several modifiers. A 2012 study published in Poultry Science on egg defect traits found that double yolk eggs have a high heritability estimate. Percentage of double yolkers therefore can be increased through selective breeding.

This study also found that high-producing hens are less likely to lay double yolkers. Conversely, double yolk eggs are more likely to be laid by hens with high body weights and hens that tend to produce unusually large eggs.

In another study, the number of double yolk eggs laid by White Leghorn pullets to the age 40 weeks was increased from two to at least 30 per hen over 11 generations of selective breeding. By the 10th and 11th generations the incidence of eggs with three or four yolks was also increasing. If you think four is a lot, consider the world record for the number of yolks found within a single egg — nine!

Selective breeding of Gaoyou ducks in China has increased their rate of double yolk eggs to 10%. Such eggs bring a premium price because, around the world, double yolkers are considered to be a sign of good luck.