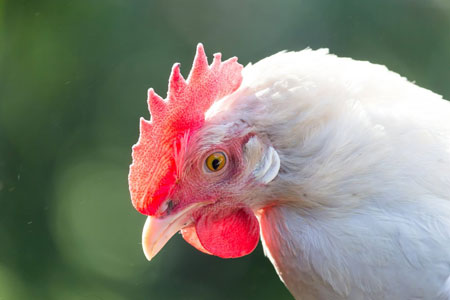 A broody hen stops laying eggs when she starts setting. Therefore, throughout the ages poultry keepers who have raised chickens primarily for eggs have culled persistently broody hens. In other words, they selectively bred in favor of non-setters. As a result, the breeds best known for superior laying ability are less apt to brood than others. Among the non-setters or infrequent setters, here are 10 least broody chicken breeds.

The breeds that are classified in the American Standard of Perfection as Mediterranean are typically non setters. In general, these breeds are light in weight and somewhat flighty. Among them are Minorcas, Sicilian Buttercups, and production type Leghorns.

Occasionally hens of a Mediterranean breed will decide to brood. However, they are rarely reliable as setters, often abandoning the nest before the hatch. And they are even less reliable as mothers.

Breeds that are classified as Continental are either non setters or infrequent setters. Least likely to brood are Crevecoeur, Hamburg, Lakenvelder, and Polish.

Continental breeds originated in Northern Europe. They were developed mostly for outstanding egg production or for excellent quality meat. They are now popular in the showroom. Hens of strains bred for appearance, rather than production, are more likely to brood than those that continue to be maintained for production.

Most of the bantam breeds are known for being outstanding setters. Two notable exceptions are the Rosecomb and the Sebright.

Both breeds were originally developed in England. Both breeds are also relatively poor layers, an exception to the principle that non setters are good layers. And the eggs of both tend to be low in fertility, as is common among chickens bearing rose combs.

Hybrid layers are, as the term implies, bred for high egg production. Although they are not pure breeds, they count among the populations least likely to brood. Black sex-links, red sex-links, and production reds are hybrid brown-egg layers.

Commercial white-egg layers are not hybrids in the strictest sense. With the exception of California Whites (which are a cross between white Leghorn and California Gray) they are bred from different strains of the same breed and variety — single-comb white Leghorn.

A few breeds rarely brood during their first year of laying. They may, however, make excellent broodies during subsequent laying cycles. This deferred broodiness trait is typical of Chanteclers and Fayoumis.

Individual hens of other breeds may defer broodiness. So may hens result from a cross between a hen from a breed known to brood and a rooster from a non-setter breed.

To Brood or Not to Brood

If you wish to avoid raising hens that brood, stay away from the breeds in the American classification. Most of them are also heritage breeds. One of the traits of heritage breeds is their tendency to have good mothering instincts.

Broodiness is triggered by certain environmental conditions, including exposure to increasing daylight. Increasing light triggers an increase in the hormone prolactin. That, in turn, inhibits the production of gonadotropin, which is responsible for ovulation that begins the development of each new egg. When gonadotropin is inhibited, the hen’s ovary regresses and she stops laying, typically coming back into production only after her chicks have hatched and are well on their way to independence.

The fact that broodiness can be selectively bred into or out of a flock indicates it has a genetic component. But poultry scientists have yet to pinpoint the exact genetic basis for what makes some hens broody and others non setters.

Among the various breeds that rarely brood, some strains will have stronger brooding instincts than others. Even among breeds that are least likely to brood, the occasional hen will take a notion to hatch out some chicks. So, just as broodiness has been bred out of certain strains, the broodiness trait may be improved in a flock by keeping as future breeders the offspring of a broody hen.