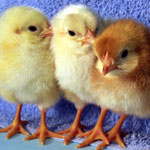 The terms “sex link” and “autosex” both refer to chicks that may be sorted by gender from the moment they hatch. But the two words are not synonymous. Sex link chickens, or sex links, result from mating a hen and a rooster of two different breeds. Autosex chickens are the offspring of a hen and a rooster of the same breed and variety.

A sex link chicken has been crossbred to take advantage of dominant and recessive (or the presence and absence of) genes carried on both parents’ sex chromosomes. The gender of the resulting chicks may be determined by obvious differences in their physical appearance, such as down color or wing feather length, instead of by the traditional microscopic examination of their sex organs, a process known as vent sexing.

Red Sex Links, for example, are created by mating a Rhode Island Red rooster to a Delaware hen. In the resulting chicks, the females (pullets) are red, while the males (cockerels) are yellow. The opposite mating does not produce sex links. If you were to cross a Delaware rooster with a Rhode Island Red hen, all the first-generation chicks, whether pullets or cockerels, would have the Delaware feather pattern.

Like sex link chicks, autosex chicks also reveal characteristics at hatch by which the pullets may be distinguished from the cockerels. The term autosex was coined as a way to differentiate between sex link crossbreds and sex link straightbreds (purebred chickens).

An example of an autosex breed is the barred Plymouth Rock. Although all the chicks are black with white spots on their heads, the cockerels are a little lighter in color and their head spots tend to be irregular and elongated or scattered. The pullets, by contrast, are somewhat darker and their spots are more round and compact. Sexing chicks of autosex breeds is not always as easy as sorting sex link hybrid chicks.

During the 1930s many autosexing breeds were developed in Cambridge, England by starting with barred Plymouth Rock crosses. The names of these new breeds were devised by combining the names of the original crosses: Ancobar (Ancona plus barred Rock), Cambar (Campine), Cobar (Cochin), Legbar (Leghorn), Rhodebar (Rhode Island Red), Welbar (Welsumer) and so forth. At hatch the cockerels have lighter down than the pullets. Some of these breeds have become extinct. Others remain relatively rare.

In the United States the autosexing California Gray was developed by crossing barred Rocks with white Leghorns, resulting in pullets that are darker than cockerels. Today this breed is used primarily to produce the sex linked California White. Although all the chicks are yellow with black body spots, only the pullets have head spots.

An important distinction between sex link hybrids and autosex breeds is that sex links do not breed true, while all the offspring of an autosex breed will be the same as their purebred parents.

And that’s today’s news from the Cackle coop.

2 thoughts on “What’s the Difference between Sex Link and Autosex Chickens?”