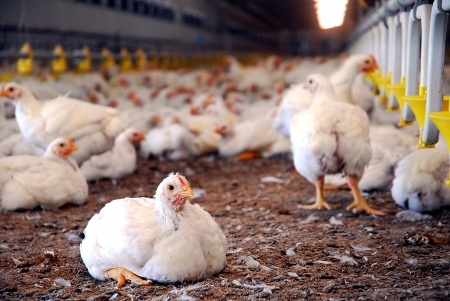 Back in the 1950’s, broiler chickens were, on average, about one fourth the weight of today’s broiler chickens. They’ve gotten bigger, bulkier and meatier. A recent article in the Huffington Post illustrates this point with photographs comparing broiler chickens in 1957, 1978 and 2005. The difference is striking; the broiler chicken from 1957 looks like just a pullet by comparison.

So what’s the deal here? Our knee-jerk reaction might suggest growth hormones. Fortunately, however, this is not the case. The FDA made it illegal to treat poultry with growth hormones in the 1950’s. Likewise, steroids have been banned in poultry since the same time. So why are broiler chickens getting so big these days?

We’re not the first ones to try to find an answer to this perplexing question. Recently, scientists in Canada decided to get to the root of the issue by growing three breeds of broiler chickens in a controlled environment. One breed was common in the 1950’s, one in the 70’s and one from the 2000’s. The chickens were all fed on the same diet and none of them were given growth supplements.

Sure enough, the modern chicken breed was significantly larger than the other two. So what’s the culprit? According to the study, it all comes down to genetics and selective breeding. Over the course of the last 60 years, factory farms have been breeding big chickens with other big chickens in order to make even bigger chickens. As a result of all this selective breeding, fast growing broiler chickens have become more susceptible to leg issues because their bones and muscles are unable to keep up with supporting the weight of the chicken. Congestive heart conditions are also common issues for these chickens because of their rapid growth.

Just like we’ve bred corn to be sweeter, we’ve bred chickens to be larger. There’s no real danger in eating large chickens, but there is some concern for the welfare of the animals that have been subject to the selective breeding.

As if we needed one more reason to keep our own backyard flocks. Stay tuned for more updates from the Cackle Coop!