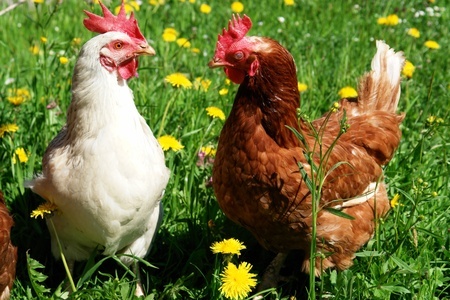 If you have chickens in your back yard, you may have begun to notice that they’ve formed their very own clique with certain chickens exhibiting specific behavior and other chickens reacting or reciprocating. Ever wonder why? It’s all about the pecking order!

First of all, you should know that your chickens are social creatures, so you should think of them kind of like a wolf pack. They typically form a type of hierarchy, just like wolves or high school teenagers, in an effort to maintain order. The social structure of chickens is referred to as the pecking order.

The pecking order divvies up tasks like egg laying, feeding and drinking, roosting, crowing, mating, and even bathing. Stronger birds, both physically and in personality, rank at the top, while the weaker and more timid birds will fall to the bottom of the order. This is usually established when the chickens are young chicks, and their pecking order is maintained throughout their lives. This pecking order can change if you put them in a new pen or introduce new chickens into the pen.

When chickens have disagreements about their pecking order, like when one challenges another, they may flap their wings at one another or make loud noises. Most people prefer not to interfere in these issues unless there’s a serious scuffle going on, in which case you can remove an injured or particularly aggressive bird from the flock.

If you’re introducing a new chicken to the flock, you should do so like you would introduce a new fish to a fish tank. You can section off a part of the coop if possible, or place the chicken in her cage near the other chickens until they get used to one another and can then be introduced officially. In these stressful situations, it always helps to give your chickens plenty of places to eat, drink, and hide.

From the Cackle Coop!