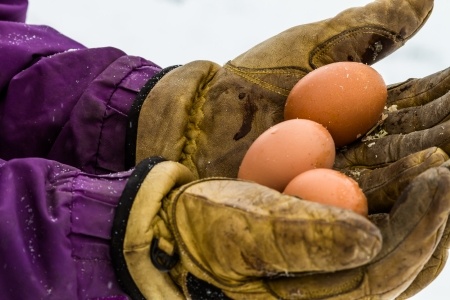 Imagine you walk out to your chicken coop and find a soft-shelled egg, or even an egg with no shell at all. It would be a pretty disturbing sight, especially if you’ve never seen one before. Besides the fact that these eggs are pretty messy to handle, they could also be an alarm that something is wrong with your chicken’s health.

To understand what happens when eggs deviate from the norm, you must first understand how a normal egg is formed:

A soft-shelled egg has a thin layer of shell around the yolk and egg whites. The feel of the egg is often leathery and pliable. You may be able to handle a soft-shelled egg without breaking it, as they can still be very durable.

There is no layer at all deposited over the yolk and egg white. It is laid with just the inner and outer protective membranes over the yolk and the white. This obviously means that something has aborted the next step in the process. A totally shell-less egg is normally not what we think of as egg-shaped, and is very delicate, while a soft-shelled egg has already taken on its characteristic oval shape.

What Causes Soft-shelled and Shell-less Eggs?

39 thoughts on “Why Are My Chickens Laying Soft Eggs?”