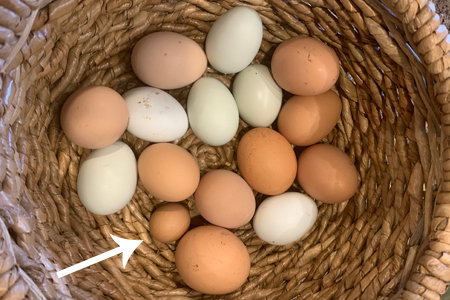 First time chicken keepers are often surprised when a hen lays a miniature egg. A mini egg typically does not contain a yolk, and therefore is sometimes called a yolkless egg or a no-yolker. It might also be called a cock egg, dwarf egg, fairy egg, fart egg, or wind egg. So why does a hen lay a miniature egg?

Round, yolkless miniature eggs typically occur as a pullet’s first efforts. They are produced before the pullet’s reproductive system is fully geared up — not yet prepared to release a yolk, but ready to develop the rest of the egg.

Sometimes a mature hen lays a tiny yolkless egg at the beginning or end of her laying cycle. Such an egg likely results when a bit of reproductive tissue breaks away, stimulating the egg-producing glands to treat it as if it were a yolk — wrapping it in albumen, membranes, and a shell. Where you would expect a yolk, this egg contains a small particle of grayish tissue.

Sometimes, as with a pullet, a hen’s miniature egg contains a real yolk. That might occur if something disrupted her normal laying cycle. The hen, for example, may suffer from stress induced by heat, crowding, or poor nutrition, including inadequate protein or salt. She may be continually pestered by a rooster. Or she may be ill or injured and lack enough energy to both heal and produce eggs.

The mini egg of a brown shell layer may be darker, or lighter, than her usual eggs. The difference in shell color indicates the tiny egg spent more, or less, time in the uterus. The uterus, or shell gland, is where the shell gets its brown pigment overlay.

Some of the picturesque names for miniature eggs derive from myth or superstition. A fart egg or wind egg, for instance, is supposedly the result of breaking wind. A fairy egg was left by a fairy. A cock egg was laid by a rooster.

Since these eggs contain no yolk, they can’t hatch. Yet people once believed they were evil, giving rise to this limerick by Robert Hogg:

A cock’s egg’s just white in a shell;
There’s no yolk, it’s a dead sort of cell —
From a juvenile bird —
But a myth, quite absurd,
Claims it hatches a creature from Hell.

The “creature from Hell” is a cockatrice— a legendary dragon-like fire-breathing beast that looked like a giant rooster with lizard-like characteristics. To prevent a cock egg from hatching, frightened chicken keepers would toss the egg over their house, taking care not to hit the roof. After sailing over the house, the egg crash-landed on the other side and was thereby rendered harmless.

A hen that regularly lays miniature eggs may have something going wrong inside, calling for consultation with a veterinarian. The occasional appearance of a miniature egg, however, is perfectly normal and is therefore no cause for concern.