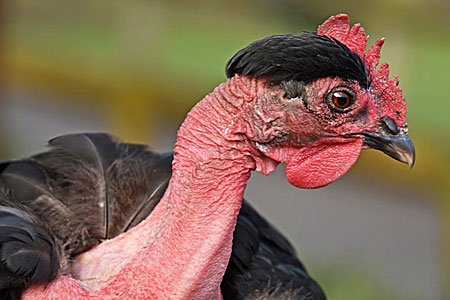 Chickens have no sweat glands, so chicken breeds that originated in hot climates have developed other features to help them stay cool. One is to grow a large comb and wattles, through which blood circulation increases in hot weather to help dissipate body heat. Another warm-climate adaptation is to avoid trapped heat by developing sparse feathering on the body and no feathers on the legs and feet. Heat-hardy chickens also tend to have less body mass. Reflective light-colored feather patterns are also helpful. Here are 16 chicken breeds that tolerate warm weather.

The many chickens that are considered to have originated in the United States were brought here from other countries and later developed into distinctly American breeds. Although they tend to be heavy-bodied, these four American breeds have large combs and clean legs that help keep them comfortable in warm weather: Delaware, New Hampshire, Rock, and Rhode Island Red.

Chicken breeds that originated in Italy and Spain are generally small bodied and clean legged, and often have outsize combs. These four breeds were developed to be especially prolific layers, despite the warm climate from which they came: Leghorn, Minorca, Spanish, and Sicilian Buttercup.

The Naked Neck chicken originated in Transylvania-Romania as a breed with a large single comb and wattles, and no feathers growing on the neck — two features that help dissipate heat. On the other hand, this chicken requires plenty of protective shade to prevent sunburned skin.

The Old English Game is an ancient breed developed England. It is similar to the tropical red jungle fowl that is ancestor to all domestic chicken breeds.

The Welsumer from the Netherlands is a light-weight layer breed. It is named after the Dutch village of Welsum. Outside Holland the breed name is typically misspelled as Welsummer, leading some people to assume it is so named because it does so well in summer.

The Fayoumi is an ancient breed from Egypt. It’s a small, scrawny breed with a large single comb, and is a terrific egg layer.

The Phoenix and Yokohama breeds originated in Japan. The Phoenix has large single comb, while the Yokohama has walnut or pea comb. Otherwise, they are quite similar in appearance, with small bodies, long tails, and clean legs.

The Sumatra chicken is an ancient breed originating from the Indonesian island of Sumatra. Coming from a tropical climate, it is well adapted to warm weather despite its pea comb, small wattles, and pitch-black plumage.

The Austra White is a hybrid layer with a large comb, clean legs, and white plumage. It’s on the large side, thanks to its Australorp parent, but thanks to its Leghorn parent it is warm-weather chicken and a terrific layer of white-shell eggs.

Cinnamon Queen is a cross between a Rhode Island Red and a straight comb production Rhode Island White. Like both parents, it has a large comb and clean legs. It is an outstanding layer of eggs with brown shells.

Even though breed characteristics are important factors in determining a chicken’s temperature tolerance, all mature chickens can somewhat adapt to warm weather through gradual exposure. A chicken that is gradually acclimated to warm weather is much more likely to tolerate high temperatures that may otherwise be lethal. A slow, steady rise in temperature therefore causes any breed much less stress than a sudden, drastic temperature change.