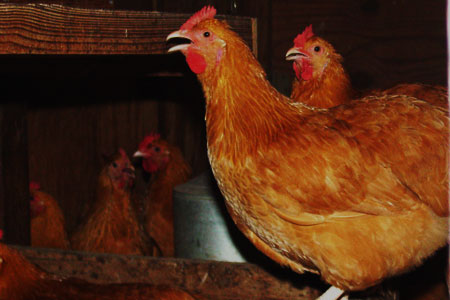 The air temperature range at which chickens maintain the best health and productivity is between 70°F and 75°F. As the temperature rises above this range, physical adaptations — such as a large comb and wattles — help some breeds release body heat. All breeds also engage in behavior modifications that allow chickens to keep themselves cool in summer without using a lot of energy.

When the temperature soars, physical adaptations may not be enough. So, the first thing an overheated chicken does is move to a place that’s cooler than its average body temperature of around 106°F. On hot summer afternoons chickens hang out in shady areas and take a break from their normal busyness.

When the temperature reaches 85°F to 90°F, a chicken exposes more of its body to moving air by holding out its wings. If you’ve ever lifted your arms to expose your armpits to a breeze, you know how that can make you feel cooler in hot weather.

As the temperature exceeds a chicken’s comfort zone, the chicken has more ways to increase the loss of internal body heat. One way is through respiratory heat transfer. A chicken’s extensive respiratory system — which includes not only its lungs but also the air sacs around its organs and the air spaces within some of its bones — is an important mechanism for removing internal body heat.

When a bird inhales air that’s cooler than its internal body temperature, it exhales moisture-laden warmer air. A chicken pants to increase the rate of heat loss. Panting is an efficient way for a chicken to lose heat, because (unlike in humans) air passes through a chicken’s lungs in one direction, so outgoing warm air doesn’t mix with incoming cooler air. But panting is helpful only if the ambient temperature is lower than the chicken’s body temperature.

When panting isn’t enough to keep its body temperature from rising, the chicken increases the rate of evaporation by rapidly vibrating its throat muscles. This technique is known as the gular flutter, from the Latin word gula, meaning throat. Gular flutter increases the rate of evaporation from the moist lining of the chicken’s throat and mouth, accounting for as much as 35% of total heat dissipation.

Another way chickens increase the loss of internal body heat is through excretion. Excretory heat transfer is accomplished by drinking lots of cool water. The chicken’s body warms the water, then eliminates the water in droppings.

At high temperatures chickens increase the rate of excretory heat loss by drinking much more than usual, which causes their droppings to become loose and watery. In hot weather, chickens therefore need plenty of cool water available at all times. Off-color droppings during the heat of summer may be a sign the birds aren’t getting enough to drink.

Chickens eat to meet their energy needs. Since they need less dietary energy in warm weather than in cooler weather, they eat less. Unless their summer layer ration contains a higher percentage of protein than their winter ration, they’ll get less total protein and therefore won’t lay as well.

Warm weather also increases the calcium needs of hens, at a time when they are eating less and therefore get less calcium from their ration. In addition to upping the protein level of the layer ration, you can help your hens get the nutrition necessary to continue laying by offering a calcium supplement (such as oyster shell) free choice. To aid calcium absorption, add vitamin AD&E powder to the drinking water three times a week.

A mature chicken that is acclimated to warm weather pants less readily and is less likely to suffer at what might otherwise be a lethal temperature. But a chicken that can’t maintain its core temperature below about 115°F is in serious danger.

The likelihood of a chicken dying from heat stress depends on many other factors, including the bird’s age and size, how rapidly the air temperature rises, how high it goes, how long the weather stays hot, and how humid the air is. Factors that help chickens survive a hot spell include the birds’ ability to find shade, preferably with a breeze, and plenty of cool water to drink.