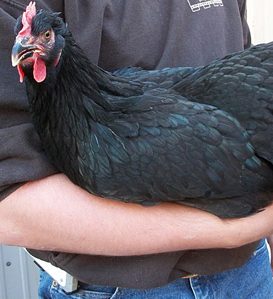 The Marans chicken breed originated in the French port town of Marans. The breed is known in France as Poule de Marans, or Chicken of Marans. French Marans have sparsely feathered legs. British poultry enthusiasts prefer birds with featherless legs. So when the Brits imported French Marans, they bred them to be clean legged. Today that remains the main difference between English Marans and French Marans chickens. 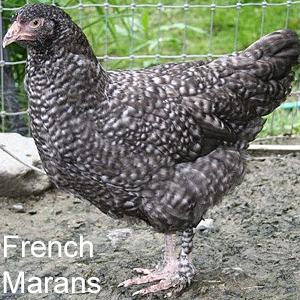 In the 1920s French poultry enthusiasts began standardizing feral chickens descended from birds left by Indian and Indonesian seafarers in the 1800s. Their goal was to develop a dual-purpose breed that lays eggs with dark shells, matures quickly, and produces fine quality meat. They eventually standardized Marans in nine color varieties: Colombian, cuckoo, golden cuckoo, birchen, black, black copper, black-tailed buff, wheaten, and white. Other color varieties have yet to be standardized.

A striking attribute of the Marans breed is the deep chocolate brown color of their eggs. The shells of eggs laid by some Marans hens are so dark they appear almost black. Other hens lay brown eggs with darker speckles.

Shell color is evaluated according to an egg shell color chart. Colors are given numbers ranging from #1 (nearly white, and unacceptable for a Marans) to #9 (nearly black, and rather rare). For each hen, shell color varies throughout the laying cycle. 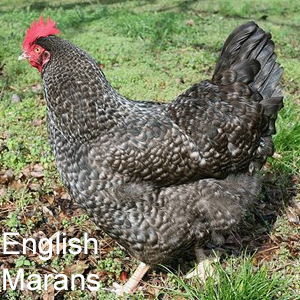 British poultry enthusiasts became interested in French Marans around 1929 but bred them to have clean legs. The British Poultry Standards, in fact, considers feathered shanks to be a serious defect. The most popular variety in England is the cuckoo Marans.

Some English breeders discouraged broodiness, because it interferes with production of the highly prized dark-shelled eggs. Marans eggs bring a premium price, especially since author Ian Fleming revealed that they are James Bond’s favorite eggs. As an upshot, the broodiness of English Marans hens is variable, compared to that of the more reliably broody French Marans hens.

Interest in Marans in North America increased in the late 1990s. Some bloodlines originated in England, and some in France. For a time, English cuckoos were the prevailing variety in the United States. When Marans fever ramped up among American poultry enthusiasts, imports of French Marans varieties increased.

Marans enthusiasts organized clubs and set out to have the breed recognized in the American Poultry Association’s Standard of Perfect. Controversy sprouted regarding whether to standardize the English clean-legged Marans or the French feather-legged Marans. The French Marans prevailed.

As of 2011, four Marans varieties have been accepted by the American Poultry Association. They are black Marans, black copper Marans, wheaten Marans, and white Marans. Other varieties are sure to follow.

Unfortunately, confusion still remains about whether exhibition Marans should be cleaned legged or feather legged.

Cackle Hatchery® started breeding cuckoo Marans in 1999, at a time when English Marans were the prevailing type in this country. Later, when French imports became popular, Cackle (like other hatcheries) designated them as French Marans to distinguish them from the English type.

In 2011, when the American Poultry Association accepted Marans into their list of standardized breeds, the chosen breed name did not distinguish between British type Marans and French type Marans (both called “Marans” in their home countries). As a result, unwitting potential exhibitors sometimes acquire English-type Marans without first checking the APA Standard.

The Standard describes Marans as having shanks that are lightly feathered down the outer sides. It lists absence of feathers on shanks as a disqualification. So if you plan to exhibit your Marans, be sure to get the feather-legged French type Marans of a color variety currently listed in the Standard.

More information about Marans chickens in America is offered by The Marans Club and the Marans Chicken Club USA.