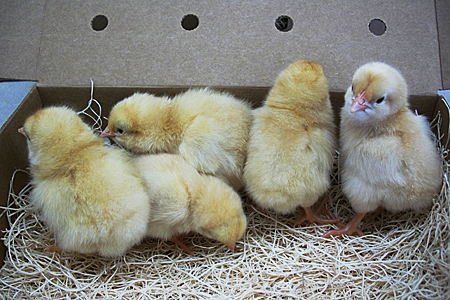 Every spring, Chick Season® causes a surge in shipments through the United States Postal Service. The annual increase in cargo, consisting of chicks and support accessories, creates space issues. As a result, chick shipments may get delayed in transit. Sometimes the surge in numbers of packages will slow things down to the point that chicks miss connecting flights. These issues occur every year.

“Chicks are now being booked and reserved way in the future, because they are currently sold out in the near future,” says Jeff Smith of Cackle Hatchery. “On our website we have an availability tab under each breed. We encourage customers to check availability before placing an order.”

Live animals, including chicks, therefore legally cannot be shipped in the same truck or plane as packages that contain dry ice. So, as a result of the increase in dry ice shipments, some chick shipments are held back, incurring late delivery. “Of course, that makes it difficult for chicks to thrive and rebound,” says Smith.

However, the longer delivery time does not apply to chicks. So even though your order tracking may show an estimated delivery time of 3 to 5 days, chicks should be delivered within 72 hours. But brooder kits, chick feeders and waterers, and other supporting products may be delayed.

Any items that are needed to ensure the comfort and safety of delivered chicks must be ordered well in advance of the chicks’ delivery date. Which is always a good idea, anyway, as a brooder should be fully set up before the chicks arrive. Knowing how to care for chicks delivered by mail will give your baby chicks the best possible start in their new home.