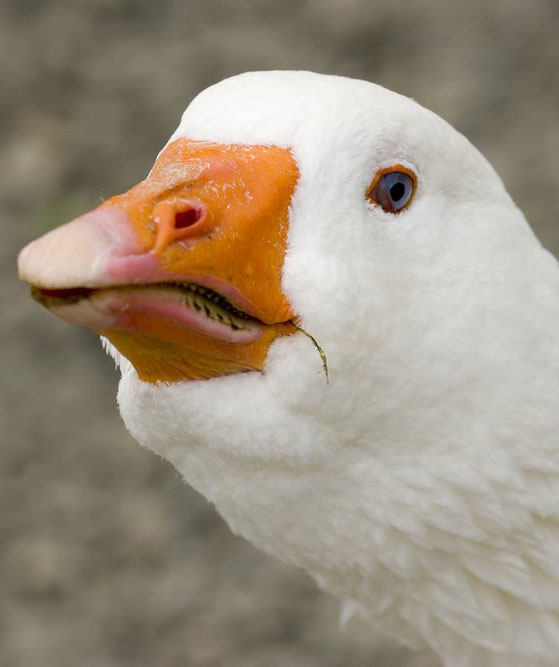 Geese can get pretty aggressive. The behavior relates to the fact that they are large, clumsy birds. They can’t easily hide when threatened, so they resort to aggression to ward off danger.

The best way to avoid aggression aimed in your direction is to take time to greet your geese whenever you enter their yard. Notice how they gabble and posture while greeting one another; it’s the polite thing to do. It’s the goose equivalent of humans shaking hands.

Another way to minimize aggression is to avoid big, sudden, or loud movements while you are tending your geese. Also ensure that dogs, children, and all others are taught to move quietly among your geese and to never, ever tease them.

A gander gets especially aggressive during breeding season, when he will fiercely defend his mate while she’s on the nest, and later with the same fierceness defend his offspring. When a gander is thinking about attacking, he will stretch his neck full length, throw his head back, and peer at you with one eye. This posture indicates he isn’t too sure about the wisdom of attacking. If you move toward him waving your arms and making a loud noise, he’ll likely back off.

The time to beware is when an annoyed goose makes a beeline toward you with his neck stretched forward, head down, making hissing sounds. This gander plans to bite, but the worst thing you can do is run away. You need to show him who’s boss, but that doesn’t mean giving him a swift kick with your boot or otherwise engaging in a tussle. Fighting with a gander will only make him meaner.

When a gander comes at you with the intent to bite, clap your hands and stamp your feet. If he keeps coming, swing your arms to make yourself look as big as possible, and run toward him. If that doesn’t work, extend your arm with a pointed finger (creating the appearance of a long goose neck with a beak at the end), and move menacingly toward him. Tell him firmly, “Don’t you dare!”

If he gets close enough to bite, give him a sharp smack on top of the bill. With a young gander, only one or two smacks should be enough to let him know which of you is the bigger, meaner gander. Once you’ve made your point, you shouldn’t need to repeat it in the future. Smacking may seem heartless, but it does not injure the goose and it sure beats getting attacked by a big angry bird.

And let me tell you, this is no laughing matter! A goose has a sharp toothlike tip on its upper bill. When it takes a pinch of your skin, twists its head, and pulls back, the result is torn flesh surrounded by a bruise. And that’s not the least of it. As the goose pulls away, it is likely to give you a couple of good whacks with one or both wings. Getting hit by the wing’s bony edge feels like being beaten with a billy club, causing multiple bruises on your person.

So, take heed: If a smack on the bill doesn’t serve as sufficient deterrent, step to one side as the gander rushes at you, grasp him by the back of neck, and turn him away. If he struggles to turn back toward you, lift him off the ground, keeping clear of his flailing wings. This action does not harm to the gander, but does cause him to suffer a great indignity he is not eager to repeat.

As young geese are growing, if you offer polite greetings, and nip aggression in the bud at the first sign, your geese can learn to be docile and fun to be around.

Gail Damerow is editor and principal author of Backyard Homestead Guide to Raising Farm Animals, which includes a chapter on raising geese and ducks. 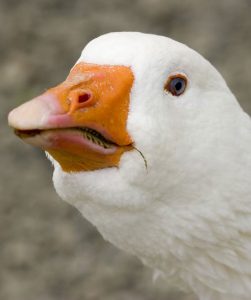 10 thoughts on “How to Deal with an Aggressive Goose”