View cart “Bronze Heritage Standard Turkey” has been added to your cart.

Unfortunately, we do not have any availability for this product right now.

Your total order requires ANY 3 birds to ship.

Not to be mistaken for the Broad Breasted Bronze turkey, the Heritage (Standand) Bronze turkey has been around for most of American History. It originated by crossing the Wild Eastern Turkey with the domesticated turkeys brought over by early European Colonists. The cross resulted in a vigorous, larger turkey than the one brought over by the colonists and was tamer than the wild Eastern turkey. Colored the same as the Broad Breasted Bronze turkey they were known in the early 1700s but did not take the name of Bronze until in the 1800’s. It was recognized into the American Poultry Association in 1874.

We can not ship turkeys to Hawaii. 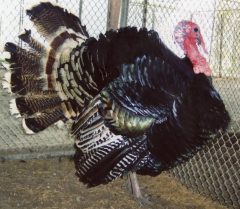