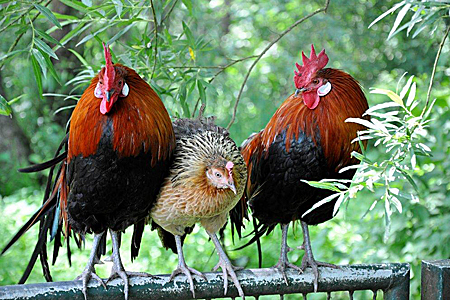 Since the 1800s humans have believed chickens were domesticated from red jungle fowl of Southeast Asia. The main reasons for this assumption are that red jungle fowl (pictured above) look similar and can interbreed with modern chickens. However, we had no real proof of the origin of modern chickens until the advent of gene sequencing.

Further, of the five subspecies of red jungle fowl that have been identified, which one might be the ancestor of modern chickens wasn’t discovered until recently. Identifying the most likely red jungle fowl subspecies also reveals where chickens were first domesticated, based on the natural home range of that subspecies.

A chicken’s genome is a complete set of genetic information revealed in its DNA. Until June 2020, only 76 chicken genomes had been published, derived from 7 red jungle fowl (Gallus gallus) and 69 modern chickens (G. gallus domesticus).

The new research indicates that these other jungle fowl species have interbred with modern chickens only on local levels. And they are unlikely to have been involved in the original domestication.

Of the five red jungle fowl subspecies, G. g. spadiceus was found to be most closely related to all domestic chicken populations. This finding indicates that chickens were domesticated in the subspecies’ home range encompassing Myanmar, Laos, northern Thailand, and southwest China. From there they were likely dispersed by traders and migrants.

Interestingly, however, white Leghorns have a significantly higher proportion of G. g. murghi DNA than other modern chickens. This subspecies, native to India, therefore apparently played a key role in the development of the commercial white Leghorn. The implication is that the Leghorn breed was developed in India by interbreeding red jungle fowl of the G. g. Murghi subspecies with chickens domesticated from the G. g. spadiceus subspecies.

All modern chickens, in general, are more fertile, lay better, and mature earlier than wild jungle fowl. Analysis of the genetic data indicates that these traits result from selective breeding on the part of early chicken keepers.

To date, no DNA from ancient jungle fowl has been sequenced to verify these assumptions. That’s because of the difficulty of finding chicken bones at archaeological sites. If ancient humans didn’t eat them, scavengers surely finished them off. And any that might have survived are small enough to be thus far overlooked by archaeologists.

Having a large, and growing, chicken genome database allows researchers to analyze genetic variations behind such traits as the ability to withstand disease or to produce more eggs. Further, by collecting genomic information from chicken populations around the world, we begin to understand their vast genetic diversity. That diversity, combined with conservation efforts, may allow future chicken keepers to create different and exciting new breeds.

We humans know amazingly little about the origin of modern chickens. With the development of new technologies, however, we continue to expand our knowledge one tiny bit at a time.