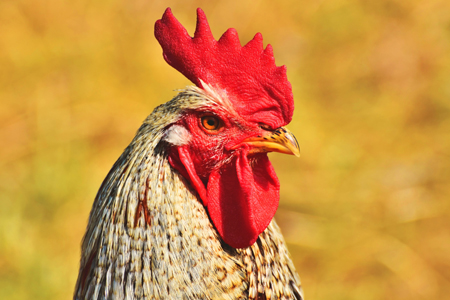 A rooster’s wattles come in flexible pairs that dangle beneath the beak, while its comb is a single structure prominently affixed to the top of the head. Researchers have determined that hens base their choice of mates, in part, on characteristics of the comb. But when it comes to wattles, they scratch their scholarly heads and ponder: Why does a rooster have wattles?

Wattles are two thin, flexible flaps of skin that hang under a rooster’s beak. The size of the wattles, like the size of the rooster’s comb, is related to testosterone. Size, therefore, is an indication of social status — the biggest, baddest rooster has the biggest, brightest comb and wattles.

But the relative size of the comb and wattles changes throughout the bird’s life. For instance, they become slightly smaller when the rooster’s testosterone levels are naturally low during the heat of summer, and also during winter, when daylight hours drop below 14. If a rooster loses rank in the pecking order, its lower status is reflected by a reduction in the size of its comb and wattles.

The first function of a rooster’s comb and wattles are to indicate sexual maturity. When a young rooster reaches the age of 4 to 6 weeks, depending on breed, its comb and wattles become more conspicuous than those of a same-age hen of the same breed.

The comb and wattles are also an indication of the bird’s state of health. A healthy rooster has plump, bright comb and wattles of normal color for the breed — most are bright red, but a few breeds (such as Sebrights, Silkies, and Sumatras) have purplish combs. Poor health, or stress (such as during a molt), can cause the comb and wattles to shrink or swell, take on a paler or darker shade, or develop blemishes on the surface. These signs are noticed as much by flockmates and by the flock owner.

Aside from their relationship to functions of the comb, the wattles may have a separate function of their own. Researchers at Australia’s Macquarie University, led by K-Lynn Smith, suggest that wattles help a rooster gain a hen’s attention while he’s tidbitting.

Tidbitting is a routine performed by roosters that consists of high pitched, pulsating sounds combined with repeated rhythmic movements of the head and neck, during which the rooster picks up and drops a piece of food without eating it. He makes this commotion to attract hens for the purpose of mating.

Smith also found that males show a higher rate of food calling and head bobbing when presenting a highly preferred food item, like mealworms. Faster head and neck movements increase the amplitude of wattle motion. So, not only do the rooster’s waggling wattles draw the hens’ attention, they also indicate the quality of the food being offered.

Hens tidbit, as well, to assemble their chicks. And hens also have wattles, but not nearly as large as a rooster’s. Maybe that’s because chicks don’t stray as far from their mother as hens wander away from roosters. So a mother hen doesn’t need large attention-getting wattles. As they say in the world of science: Obviously more research is needed.