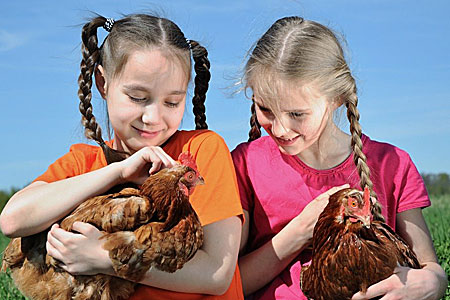 Defining the differences between a purebred and a hybrid chicken can be complicated. Some breeds are not purebred. But even a pure breed may have started out as a hybrid.

What is a purebred chicken?

Purebreds, also called straightbreds, will breed true. That means all the breeder roosters and hens have uniform bloodlines, and their offspring will be pretty much like the parents. However, to complicate things, a chicken breed may be either a primary breed or a secondary breed, according Dr. Phillip Sponenberg, professor of genetics at Virginia Tech.

Dr. Sponenberg defines primary breeds as having a three-step background. First comes foundation (the original genetics). Then isolation (so the original mix isn’t changed by new genetics). Followed by selection (deciding which specific chickens to continue breeding and which to reject). A fourth dimension for some breeds is the ability to be productive in a specific environment.

Through years of selection for chosen qualities, a primary breed eventually develops a uniform phenotype, or outward appearance. The final step, then, is to recognize this uniformity by standardizing the breed. The development of many heritage breeds followed this pattern and they are considered to be primary breeds.

So what is a secondary breed?

Secondary breeds originate by working backward, starting with a concept of uniform appearance and often altogether skipping foundation and isolation. An example offered by Dr. Sponenberg is the many varieties of Wyandotte. These varieties are superficially similar but don’t all share the same foundation genetics.

Many other breed varieties (or large chickens and bantams with the same breed name) that were developed for exhibition fall into this category. You can check this for yourself by reviewing breed origins as outlined in the American Poultry Association Standard of Perfection.

Since uniformity of appearance is the main goal, outcrossing to maintain phenotype (or to minimize inbreeding) is a common practice. Therefore, chickens with the same breed and variety name from different flocks don’t necessarily share the same bloodlines. In other words, they lack a common foundation. That’s why you see vast differences in such things as temperament, broodiness, or laying ability in different strains of the same nominal breed.

Because these breeds lack genetic uniqueness, they are breeds in name only. The same is true of breeds that reach near extinction and then are recreated to look like the originals, but without using any of the foundation genetics.

Because of this disparity between primary and secondary chicken breeds, and because even the primary breeds don’t have registered pedigrees like most other domestic animals, some people insist there’s no such thing as a purebred chicken.

What is a hybrid chicken?

In the poultry world, a hybrid chicken is the offspring of two different breeds or varieties. So, technically speaking, secondary breeds that are maintained by outcrossing might be considered hybrids.

To be perfectly clear, the original development of many of our primary breeds started with hybridization. But, let’s not forget the next step: isolation.

Letting a bunch of different breeds randomly interbreed, on the other hand, produces random results. Such chickens are commonly called barnyard chickens or mutts. Random crossbreds are not the same as hybrids.

In today’s common usage, a hybrid chicken is the direct result of crossing highly specialized strains, often of different breeds. For layer hybrids, such as Austra White, these strains have been selectively bred for the improvement of such things as egg numbers or shell quality. For meat hybrids, such as Freedom Rangers, the specialized strains are bred for such things as large breasts and efficient weight gain. Hybrids are mainly used in the commercial production of eggs or meat.

Unlike pure breeds, hybrids won’t breed true. The only way to get more chickens exactly like them is by crossing the same specialized parent breeders. So if you wish to duplicate your flock by hatching eggs from your own chickens, hybrids are not the way to go. Neither are hybrids a good choice for anyone intent on exhibiting chickens, except for 4-H or FFA shows involving production birds.

On the other hand, if you’re looking for fast meat production, hybrids will get you there quicker than a pure breed. If you’re looking for superior laying ability, hybrid layers may be just the ticket. And they’re perfectly fine as backyard pets or just for fun.

Category: Chicken Facts
Tags: hybrid, purebred, What is a Purebred and What Is a Hybrid Chicken?
Leave a Reply Cancel reply