Chicken breeds that are best able to evade predators are the wary, high strung, excitable, so-called flighty breeds. They become alarmed more easily than other breeds, and as soon as they feel threatened they look for ways to escape.

Jungle fowl are the ancestors of all our present day chicken breeds and still retain their innate wariness. Large breed Old English Game as near relatives to the jungle fowl, also have acute reflexes. Other wary breeds suitable for a free range flock include Leghorn, Lakenvelder, Egyptian Fayoumi, and Hamburg.

Breeds that are less predator wary are the ones noted as being calm and docile, such as the Brahma, Cochin, Faverolle, and Orpington. Although these and other similarly docile breeds are extremely popular for backyard flocks, they are not as predator wary as their flightier cousins.

Chickens with white feathers are more highly visible than the more colorful breeds and therefore tend to be the first ones picked off by a predator. This is one reason the most popular strains for free range meat production are colored Cornish hybrids, in contrast to the white Cornish broilers favored by the poultry industry. These free ranging meat strains come in a variety of colors, including barred, black, and gray. Red — such as Cackle’s Red Broiler — is by far the most popular color for free range meat chickens.

Chickens that are among the least suitable for free ranging are breeds with an abundance of head feathers. While these top hat breeds with their feathery crests are popular for exhibition, and they make spectacular additions to any backyard flock, a full set of head feathers that hang over into a birds’ eyes impede the bird’s ability to see a predator coming, as well as interfere with a fast-getaway. Among the top-hat breeds unsuitable for free ranging are Houdan, Polish, Silkie, and Sultan.

Some well-meaning owners of crested chickens trim back the front feathers to improve a bird’s ability to see. However, crested breeds tend to be rather docile and less inclined than more active breeds to venture far from the coop. Therefore, even when their feathered finery is trimmed back, they are not particularly suited to free ranging.

One of the primary benefits of free ranging a flock is to allow the chickens to forage for nourishing things to eat. So there isn’t much point in attempting to free range birds that lack the desire, instinct, or ability to forage. Jumbo Cornish Cross broilers, for example, make excellent meat birds, but they’re rather lazy when it comes to foraging. Further, their white plumage can be a predator attractant, while their cumbersome size hinders any chance for a rapid escape.

Breeds that are excellent foragers include Ameraucana, Ancona, Andalusian, Buckeye, Egyptian Fayoumi, Golden Comet, Hamburg, Old English Game, and Welsumer. Jersey Giants are also good foragers, and they are too heavy to be carried away by a hawk or other raptor. On the other hand, their large size makes them particularly attractive to the larger land predators, such as bobcats and coyotes.

Although not all chicken breeds are ideally suited for free ranging, many have good foraging instincts and are otherwise relatively predator resistant. Among them are the brown Leghorn, Egyptian Fayoumi, Olive Egger, Rhode Island Red, Speckled Sussex, Welsumer, and any of the many color varieties of large breed Old English Game. 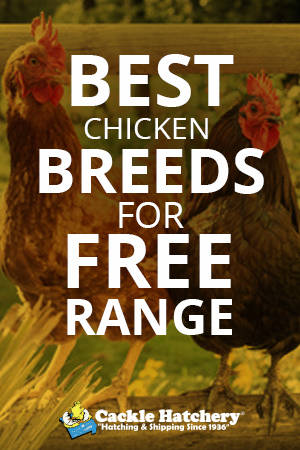