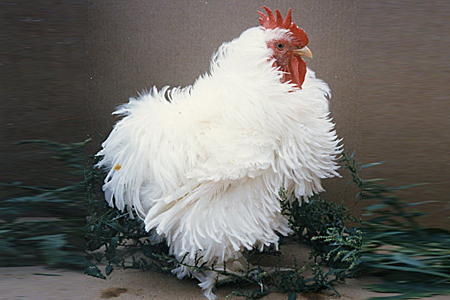 Frizzle chickens are fun and funny, but are they a breed? The answer is yes and no. In Australia, France, Germany, Ireland, Italy, and United Kingdom Frizzles are classified as a pure breed. In the United States they are considered to be a plumage variety in any breed.

Frizzling is a genetic condition that causes feathers to curl at the ends. Frizzle chickens have been around for centuries, although their country of origin is unknown. Evidence indicates they may have originated in Asia, possibly India.

The American Poultry Association Standard of Perfection first listed Frizzles in 1874. At one time these unique chickens were considered a distinct breed with a single comb. They could be either large or bantam, clean-legged or feather-legged, and one of a limited number of solid colors.

Today Frizzles in the United States are considered to be any breed or variety with frizzled feathers. They are named after the breed that has been frizzled — Frizzle Cochins, Frizzle Polish, and so forth.

The Standard description says, “Frizzles may be shown in any breed and variety set forth in this Standard of Perfection. All sections of the bird should conform to the shape description of the breed,” except that the ends of the feathers curl backward or upward; “the more all the feathers are curved and curled, the better.” The amount of frizzling is controlled by a recessive modifying gene, so getting a perfect frizzle can be tricky.

Frizzledness may be introduced into any breed by mating a member of that breed with a frizzled chicken. Half the offspring will be frizzled and half non-frizzled, although they look alike until the frizzled chicks start developing curled feathers. Some breeds frizzle more easily than others, which is why Cochins and Polish are more often frizzled than some of the other breeds.

A Frazzle is an over-frizzled chicken, also known as an extreme frizzle or curly. Frazzling is the undesirable result of mating two frizzled chickens together. Since the frizzle gene is incompletely dominant, 25% of the offspring will have smooth feathers, 50% will be frizzled, and 25% will be frazzled. The sparse bristle-like feathers of a Frazzle are so brittle they easily break away, leaving the chicken with bare patches.

A Frazzle thus lacks plumage protection against temperature extremes or sunburn. Frazzles are delicate in other ways, including having an enlarged heart, that inhibit survival.

Serious breeders of straight-bred Frizzles keep frizzle-bred normal-feathered hens in their breeder flocks to maintain the desirable curl without the undesirable frazzling. Mating a frizzled rooster to a normal hen yields 50% frizzles and 50% smooth feathered chicks.

A Sizzle is a cross between a frizzled rooster and a Silkie hen. Unlike the smooth feathers of most chickens, Silkie feathers lack the tiny hooks, or barbicels, that hold a feather’s webbing together. Silkies therefore look like they’re covered with fur. Sizzles have the same fur-like feathers as a Silkie, except they’re curled.

Wading through the confusing Sizzle terminology can be enough to frazzle anyone.