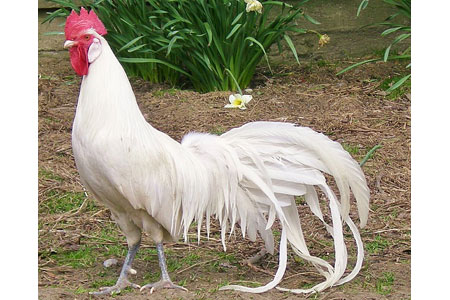 A longtail chicken is one of several breeds selectively bred for growing particularly long tail feathers. The roosters have two specialized genes that allow their tails to grow longer than those of other breeds. One is a nonmolting gene that causes some of their tail feathers to not molt. The other gene produces rapid tail-feather growth.

Longtails in North America rarely grow the luxuriant tails of Japan’s Onagadori, which, at minimum, reach 6½  feet long. That’s because North American longtails don’t have all the genetic factors controlling the growth of such excessively long tails. For example, the nonmolting gene lacks full expression, resulting in the periodic shedding of tail feathers. These four breeds in North America fall into the category of longtail chickens:

The Yokohama originated in Japan and is named after the Japanese port city from which longtails were exported to other parts of the world. The breed was further developed in Germany and shares its history with another longtail, the Phoenix. The two breeds are similar in their small size, upright carriage, and pheasant-like bodies. Yokohamas differ primarily in having red earlobes and a walnut comb. The rooster’s tail can grow as long as 3 feet.

The original Yokohamas were either solid white or red shouldered. Among more recent color varieties is the silver duckwing. hens lay small eggs with tinted shells and are variably broody.

The Phoenix shares its history with the Yokohama in originating in Japan and being further developed in Germany. It is similar to the Yokohama in size and conformation, differing primarily in having white earlobes and a single comb. To further distinguish it from the Yokohama, the Phoenix was named after a beautiful mythological bird.

Color varieties include white, golden duckwing, silver duckwing, and black breasted red. The rooster’s tail can reach an impressive 5 feet, with saddle feathers up to a foot and a half long and sickles at least twice that length. Phoenix hens lay small eggs with tinted shells and are good broodies.

The only breed developed in Cuba, the Cubalaya is intended as a dual-purpose chicken. This breed has a pea comb, comes in a few color varieties — including wheaten and black breasted red — and (like other longtails) may be large or bantam. The cocks have multiple short, knobby spurs — referred to as rosary spurs — or none at all. The rooster’s hackle, saddle, and long tail feathers majestically flow together to give this breed its distinctive appearance.

Both roosters and hens have a broad and downward-pointing tail, referred to as a lobster tail or shrimp tail. The low angle and lavish feathering of the rooster’s tail, along with its lack of spurs, make this beautiful breed readily identifiable from any other. The hens lay eggs with tinted shells and make good broodies. The Cubalaya — noted for being an active forager with a friendly disposition — was derived in part from the Sumatra.

The Sumatra is an ancient breed native to the island of Sumatra. This hardy, active, alert chicken is an extremely capable flier and high jumper. It has a pea comb, small wattles or none at all, a long sweeping tail, and multiple spurs — usually three or more on each shank.

This breed comes in a few colors, including blue and splash, but solid black is by far the most popular. The black Sumatra’s plumage is considered to be the most luminous of any black chicken breed or variety. Even the face, shanks, and skin are black, or nearly so. The hens are seasonally prolific layers of eggs with tinted shells, are good setters, and make especially good mothers.

Whether you’re looking for an outstanding exhibition breed, or an ornamental chicken to grace your backyard, consider these four breeds that grow remarkably long tails.