Rare is the hen that will lay an egg every day, year round. Most hens lay in cycles. Depending on the hen’s breed and age, one cycle may last for 12 days or as long as a year. The total number of eggs laid within one laying cycle is called a clutch.

Most hens take 25 to 26 hours to produce one egg. You can see, then, that if a hen lays an egg at 6:00 in the morning today, tomorrow she will likely lay between 7:00 and 8:00. Egg production is light sensitive, and eventually the hen will lay too late in the afternoon to start developing the next egg. She’ll therefore skip one day, or more, before starting a new clutch in the morning.

Production breeds are developed to have the shortest possible interval between eggs and therefore lay as many eggs as possible per clutch. In 1979 a super strain of Leghorns developed at the University of Missouri averaged more than one egg per day per hen. One of the Missouri super chickens laid 371 eggs in 364 days.

The average production Leghorn lays 220 to 300 white-shell eggs during the first year. A hybrid layer of brown-shell eggs, such as Cinnamon Queen averages 250 to 320 eggs per year.

Chickens that are developed mainly for exhibition purposes have not been bred for a high rate of egg production. Therefore, they lay somewhat fewer eggs than layers developed specifically for production. The poorest layers are hens that readily go brood. Such chickens prefer to spend more time hatching eggs than laying them.

As a Hen Ages

When a pullet (young hen) first starts laying, she may lay only one egg every 3 or 4 days until her reproductive system gets fully geared up. Then, after she’s been laying for about eighteen months, she’ll take a break to molt and refresh her plumage. After the molt she’ll lay fewer eggs per clutch than she did during her first year. This pattern continues as the hen ages — each year she will lay fewer eggs than the year before.

Aside from a hen’s breed and age, her egg production is affected by many external factors, including temperature and light. Hens lay best when the temperature is between 45°F and 80°F. When the weather gets much colder or much warmer, egg production slows down.

A healthy and well managed hen should lay for a good 10 to 12 years. Occasionally, you’ll hear of a hen laying to the ripe old age of twenty, by which time she’d be doing well to lay one egg a week. 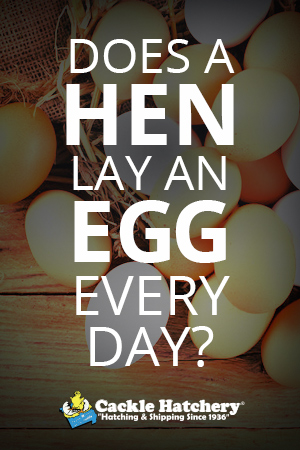 4 thoughts on “Does a Hen Lay an Egg Every Day?”