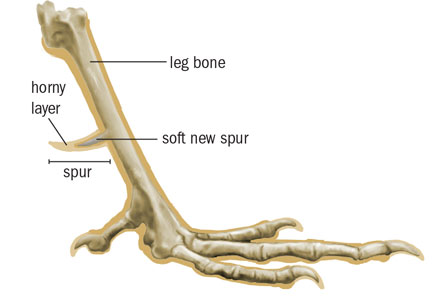 All chickens have spur buds. Roosters are well known for their spur buds developing into full-blown spurs. But hen’s can grow spurs, too.

While some roosters — notably certain strains of Cubalaya — maintain only rudimentary spurs, some hens develop long rooster-like spurs. As with roosters, the longer the spur, the older the hen.

Which Hens Have Spurs?

Generally speaking, hens of the better laying breeds are more likely than others to grow mature spurs. Hens among the Mediterranean breeds — such as Buttercup, Leghorn, and Minorca — commonly grow long spurs.

Game breed hens are also known for spur grown. Many breeders of game fowl prefer hens with spurs because they tend to make fierce mothers and produce the best offspring. Jeff Smith of Cackle Hatchery® is among those who prefer Old English Game hens with spurs, a trait that indicates original bloodlines.

Do a Hen’s Spurs Need Trimming?

Although some hens can get pretty feisty, rarely does a hen use her spurs as a lethal weapon, like a rooster might. However, just like a rooster’s spurs, a hen’s spurs can grow too long, interfering with proper mobility. A neglected spur may grow so long it curls back into the leg. 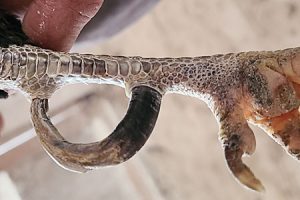 If the hen is wearing an identification leg band, a spur that grows above the leg band may result in binding. A spur or leg band that becomes imbedded in a leg can cause lameness.

For these reasons, long spurs on a hen may require grooming from time to time. Trim a hen’s spurs exactly the same way you would trim a rooster’s spurs. Since hen’s can grow spurs, too, keep an eye on your ladies’ legs as well as your gents’.