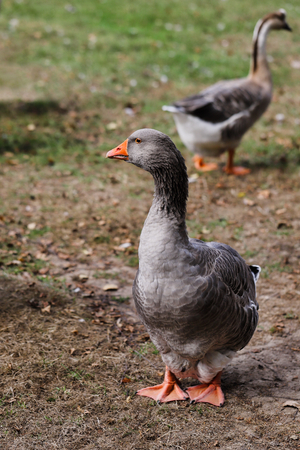 The following comments are taken from “Ducks and Geese” published by Reliable Poultry Journal Publishing Company published in 1904. Varieties discussed were the White and Brown Chinese, the African, the Emden and the Toulouse, the latter two growing by far larger than the others.

The Emden was described as a mammoth variety, pure white in plumage, and excelled by none in size. They are fairly good layers and are much sought for. The author noted they had been scarcer in previous decades but were at the time of the writing quite common.

The Toulouse is rivaled in size only by the Emden. They are of docile disposition and are good layers.

Geese live to a great age. The females are profitable up to ten or twelve years of age, and the males make up to six or seven years. It is not profitable to raise geese in confinement. They must have a pasture where from early spring they will live almost exclusively on green rye, clover or grass, needing little grain and thriving well. Do not feed too much corn in winter, as it is apt to get them too fat for breeders. Oats and barley are better. . . Toulouse geese need only enough water to drink, none to swim in.

Early in the spring I place some boxes and barrels in out-of-the-way places and cover them with rubbish, having straw or litter of some kind inside of them. Some of the geese will begin laying in February, and they will find the places provided for them. We gather the eggs every day but avoid disturbing a goose when she is on the nest, and we always arrange the nest as nearly as possible the same as we found it. Always leave a nest egg—any kind will do. A goose will cover her egg with the nest material, and in winter instinct teaches her to bury it deep.

Young geese seldom get broody the first year. We seldom let our geese sit but break them up as soon as they become broody. We put an extra gander in a yard by himself away from the other geese. Into this yard goes the broody goose or geese. Her nest is destroyed, or if it is in a barrel or box it is moved to a new position. In four or five days turn the goose out and, in most cases, she will have forgotten she wanted to sit and goes to work again. In this way we keep the geese busy laying eggs and a large common hen attends to the hatching of them.

We put the goose eggs under a hen, setting as many as we can at the same time. On the fifth or sixth day we test the eggs and divide the fertile eggs among the hens, giving each four eggs, which are as many as a hen can well cover. It takes thirty days to hatch them. Then you want to be on the lookout. The hen will sit all right, but when the young ones break the shell and the hen sees a queer, green little creature with a long, wide bill saluting her, she takes it for a freak of nature and off comes its head! Not many hens will claim the young geese, so take the goslings away as they hatch and try the hens, giving them a good, slow, gentle hen. As soon as she takes them without any fuss there is no further danger.

2 thoughts on “Raising Geese Before the Popularity of Incubators”