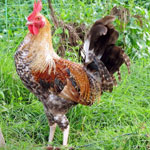 The term “standard breed” is often misused in referring to large chickens, as distinct from bantam breeds. So what, exactly, is a standard breed?

A standard poultry breed is any breed that conforms to its ideal description, as formalized (or standardized) by a central organization and compiled into a periodically updated book.

The book itself is called a Standard. The prescribed procedure for accepting a breed into the Standard begins when a group of enthusiasts get together to agree on a precise description for the breed, which must be significantly different from breeds already listed in the Standard. The same procedure is followed for adding new varieties within a standardized breed.

Standards differ from one country to another. In the United Kingdom, for instance, The Poultry Club of Great Britain publishes the British Poultry Standards, listing popular chickens, ducks, geese and turkeys that have been standardized in that country. All but the turkeys are classified by weight, and the chicken breeds are further classified according to whether they are hard or soft feathered. Not all of the breeds listed in the British Standard are commonly found in North America. The reverse is also true.

The American Poultry Association (APA) maintains the American Standard of Perfection, which lists standardized breeds and varieties of chickens, ducks, geese, turkeys and guinea fowl. Waterfowl are classified by weight. Most of the large chicken breeds are classified by place of origin: American, Asiatic, English, Mediterranean and Continental. A sixth classification, “All Other Standard Breeds Class” encompasses Game breeds, Oriental breeds and miscellaneous breeds — which don’t handily fit into any other classification. One of the breeds in this classification is the Crele Old English Game, pictured above.

This “All Other” group is the only classification that incorporates the word “standard.” The book’s glossary does not define the word standard, although the introduction states: “The aim of the Association has been to stabilize our economic and commercial breeds to uniform size, shape and color, with good production and practicability; with the provision that ornamental breeds, including the Bantam, be attractive, productive and meet requirements of the Standard breeder.”

The bantam chicken breeds are grouped into five classifications, four of which are organized according to comb style and whether the birds do or do not have feathers on their legs. The fifth classification includes all bantam Game breeds. Nowhere does this book imply that the bantams listed are not standard. Their inclusion in this book indicates that their breed characteristics have been standardized, therefore they are standard.

The American Bantam Association (ABA) maintains a separate Bantam Standard, which uses similar classifications, and also includes a classification for bantam ducks. Bantam chickens are defined as “miniature fowl one-fifth to one-fourth of the weight of the large fowl represented, some of which have no large counterpart.” The ABA and APA Standards aren’t always the same, but in recent years both groups have taken steps to reduce confusion by reconciling their differences.

Neither Standard lists all varieties of the breeds they represent, and neither Standard accepts sex links or other hybrids. Only pure breeds are accepted. To compete in an APA or ABA sanctioned poultry show, a breed and variety must be listed in one of these Standards. In other words, for exhibition purposes a chicken must be of a standard breed, whether it is a large breed or a bantam.

2 thoughts on “What Is a Standard Chicken Breed?”