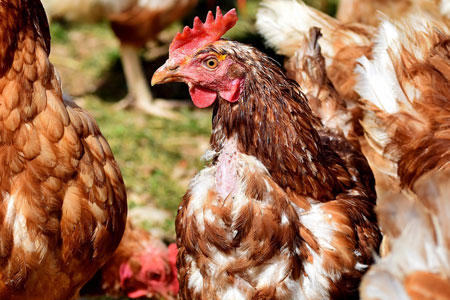 Finding lots of feathers in your chicken yard is a sign that your birds are molting and will soon develop healthy coats of fresh new plumage. This annual loss and renewal of feathers is perfectly normal and is not an indication of disease. So let’s examine the question of why do chickens molt?

Six to 8 percent of a chicken’s weight is feathers. A chicken’s feathers conserve body heat during winter. They also protect the skin from sunburn during summer, shield the skin from injury, and furnish some degree of waterproofing. Over time the feathers wear and otherwise become damaged.

Chickens lose and replace their feathers at approximately 1-year intervals, starting at about 18 months of age and usually during the late summer or early fall. Shorter days signal that it’s time to renew plumage in preparation for cold weather.

The process, called molting, typically occurs gradually over a period of 8 to 16 weeks. When chickens molt, they therefore don’t appear completely naked, or at least not usually.

The best layers molt late and fast. The poorest layers start early and molt slowly, taking as long as 6 months to complete the molt.

Out of Season Molt

A broody hen will molt out of season after hatching a clutch of eggs. That’s perfectly normal.

Otherwise, an out-of-season molt typically results from stress, such as chilling or going without water or feed. Other causes include poor nutrition or an infestation of mites. A stress-induced molt is usually rapid and partial and, unlike a full molt, doesn’t always cause a reduction in egg laying.

Baby chicks start replacing their downy fluff with feathers at 6 to 8 days of age. Just about the time they fully feather, they go through a partial molt during which the little roosters develop their male hackle, saddle, and tail feathers. Some breeds, especially fancy show models, don’t develop their characteristic feather patterns until this stage.

Keeping the brooder temperature on the cool side of comfortable encourages rapid feather growth. Failing to properly reduce the temperature as the birds grow delays full feathering.

Feathers consist of keratin, the same substance that forms a chicken’s toenails, as well as human nails and hair. But unlike nails and hair, feathers don’t need clipping because they don’t continue to grow.

A fully formed feather stops growing, the blood supply gets cut off, and no further growth occurs. The feather essentially dies. So a broken feather stays broken until the next molt.

On the other hand, if a chicken loses an entire feather, that spot will start growing a new feather right away. The feather won’t remain missing until the next molt.

That’s one reason we clip flight feathers, rather than pull them out, when we want to prevent chickens from flying. Another reason is that pulling out a feather can potentially damage the feather follicle. Properly clipped wing feathers will grow back at the next molt.