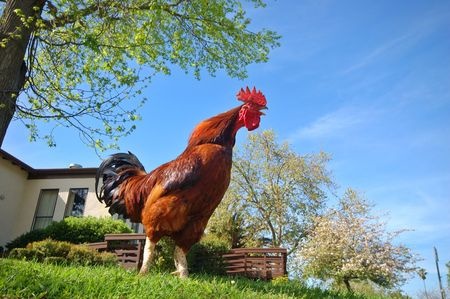 Have you ever wondered what makes a rooster crow? Well, some scientists Nagoya University have recently made it their mission to prove once and for all how all of this crowing business works, and it might not be what you think.

One widely accepted belief is that roosters crow at the first sign of daylight; folks who follow this line of thought believe that roosters need to actually see light in order to crow, and can sometimes be caused to crow in the middle of the night by a bright flash of light, like car lights turning on unexpectedly. This theory suggests that if a rooster was not exposed to the first light of day, like if it were kept inside in a dark room during the morning hours, it would not crow.

However, the scientists at Nagoya University are inclined to disagree. They performed a series of experiments with a number of roosters to test for a presence of a circadian rhythm among the birds, and found out that roosters don’t actually need to see visible light to crow. Their bodies will signal the roosters to crow when it should be dawn based on the last time the roosters saw visible light.

When a number of roosters were kept in a dark room past when the sun was supposed to rise, most of them crowed anyway, which led the scientists to believe that the roosters have a natural circadian rhythm in their bodies that alerts them as to when it should be daylight. The rising sun may be an indicator that it’s time to crow, but if for some reason a rooster can’t see the first light of day, its body will likely signal them anyway.

2 thoughts on “Here’s How Roosters Know When to Crow”