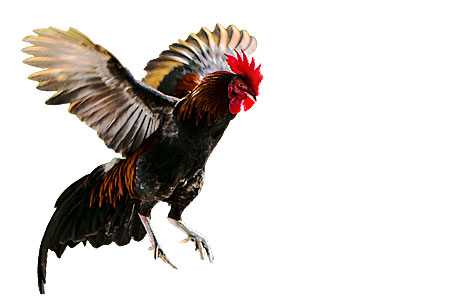 The short answer is that chickens have small wings relative to their heavy bodies. Why that matters relates to a thing called wing loading.

Wing loading is the relationship between body mass and surface area of the wings. It is calculated by dividing the chicken’s weight in grams by the square of the upper surface area of both wings in centimeters; WL = weight(g)/wing area(cm2).

Let’s assume that all chickens have the same, or similar, size wings. Wing loading, then, would be higher for a heavyweight chicken than for a lighter chicken. And wing loading determines whether or not a chicken can fly.

The chicken might gain speed with a running start, sort of like an airplane taxiing before take-off. Another way to gain speed is to flex the legs and spring into the air while flapping the wings.

Once the chicken is in the air, wing flapping allows it to maintain speed. High wing loading requires a chicken to flap more frequently than would a bird of similar size with lower wing loading. This YouTube video offers an excellent demonstration of chickens in flight.

Chickens that Can Fly

The official world record for the greatest distance for a chicken in flight is 301.5 feet. However, Sumatras have been known to fly between the Indonesian islands of Sumatra and Java, a distance of some 19 miles. Admittedly they were likely assisted by a stiff sea breeze, but still.

In addition to the Sumatra, other breeds with low enough wing loading to fly are Old English Game, Hamburg, and Yokohama. Some bantam breeds also fly well. However, despite being lightweight, small-winged bantams have the same high wing loading as the larger breeds.

Silkie bantams can’t fly because they lack adequate wing feather cover to provide lift. And any chicken is unable to fly that has missing or damaged flight feathers that diminish the wing’s surface area. Wing clipping increases wing loading, therefore reduces a chicken’s ability to fly.

Some heavy breeds with high wing loading rates manage to get airborne by jumping up while flapping. But they rarely get more than a couple feet off the ground and are unable to sustain flight for any amount of time.

Breeds developed to provide lots of white meat have high wing loading rates that make them unable to fly. Among the heaviest breeds, and therefore least capable of flight, are Brahma, Cochin, Cornish, Jersey Giant, and Orpington.

No Need to Fly

Domestic chickens derive from jungle fowl, which are ground dwelling birds. Jungle fowl don’t migrate long distances. They seek food on the ground and use trees for sleeping and evading predators. They travel through trees in short bursts from branch to branch.

So jungle fowl had no need to develop a strong ability for flight to pass along to our modern chicken breeds. And most of today’s breeds are considerably heavier than jungle fowl.

Young chickens of any breed may fly as a way to learn about their environment. But once they reach maturity, most chickens, even those that are able to fly, lose interest simply because they have no need to fly.

Getting airborne and sustaining flight is an energy intensive activity. Chickens that are provided with plenty of food and water, adequate shelter, and protection from predators have little reason to waste energy by engaging in flight.

So, why can’t chickens fly? Well, it’s true, some can’t. But even those that can fly often don’t — just because they don’t want to.